This is a stronger version of Decapitating Airwaves, having greater power, range, and coverage angle. Using a large amount of chakra, Zaku Abumi emits a high-pressured mixture of sound waves and airwaves from the holes in the palms of his hands into the area ahead of him. It momentarily blocks visibility as the air and sound quickly travel forwards, carving up the ground and reducing everything in its path to dust. The sheer destructiveness of this technique prevents it from being used in quick succession, as it places a great burden on Zaku's arms.[1] 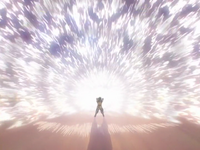