Fū Yamanaka (山中フー, Yamanaka Fū, Viz: Foo) was a shinobi from Konohagakure's Yamanaka clan, as well as a high-ranking shinobi of the disbanded Anbu faction Root.

In the anime, Fū was among many promising young children from various clans of Konohagakure that was personally selected and recruited by Danzō Shimura to join Root, much to the dismay of Inoichi Yamanaka. His training was directly under Danzō's supervision.[2]

Like all other members of the Anbu faction, Root, Fū lacks a personality due to the gruesome training regime Danzō had them undergo at a young age. As such, he acts merely as a tool that carries out Danzō's orders. The only discernible trait that he and the other members have shown is fierce loyalty towards Danzō. As such, he was willing to face Tobi with Torune and Danzō without fear or losing his temper, or even take his own eye out, while possessing Ao's body, calling it a "small price to pay" in order to fulfil Danzō's orders.[4] In the anime, as a child, he was somewhat cocky and more cheerful. Despite the teachings of Root, Fū genuinely viewed Torune as a trusted friend.[3]

When first introduced, Fū's appearance was that of a regular Konoha Anbu, with a white cloak and mask. When he removed the mask, it was revealed that he was a young man with auburn coloured hair and amber eyes. He wore a short, black jacket with red straps on the shoulders like all members of Root which most likely shows allegiance to the organisation. He also wore a red short kimono under the jacket with a black sash, a pair of black gloves, dark-coloured pants, and regular shinobi sandals.

As a child in Root, he wore a light brown short kimono with a black sash, grey pants and shinobi sandals. Fū also wore black wristbands on his wrists.

Danzō stated that he and Torune were two of the most-skilled ninja in Root.[5] Fū was a skilled sensor, able to detect that he, Torune and Danzō were still being pursued by Ao.[6] He could instantly sense when Tobi emerged behind him and act immediately.[7] In the anime, Fū proved to be skilled in taijutsu as a child, able to skilfully deflect a young Torune's attacks without being infected by his rinkaichū.[3] As an Anbu, Fū was also versed in kenjutsu, wielding a tantō to deliver quick slashes.

Fū was skilled in the use of the Yamanaka clan's various techniques. Aside from his use of the clan's Mind Body Switch Technique, Fū can employ his considerable trap-making skills to use a cursed seal variant which allows him to transfer his consciousness into a scarecrow-like puppet with kama and kuwa for limbs that he can then freely use to attack his target. When the puppet either receives or deals damage to/from the opponent, it automatically activated the cursed seal, switching the user's consciousness into the opponent's mind, while the latter's will be switched into the now-immobile puppet.

Danzō selected Fū and Torune to escort him to the Kage Summit in the Land of Iron. While on route there, they were ambushed by the Prajñā Group, but Fū and Torune stood down upon Danzō's orders as their leader wanted to exercise his skills. Once they arrived and the meeting began, Fū and his partner came to Danzō's defence during the Fourth Raikage's outburst and Zetsu's subsequent appearance. Zetsu informed them of Sasuke Uchiha's presence in the Land of Iron, and Fū alongside Torune tried to go and eliminate him but were unable to leave as Danzō, who had attempted to control Mifune was put under surveillance. Fū later alerted Danzō when Sasuke's sensor located them and subsequently fled with Danzō when Sasuke arrived at their location, but were pursued by Ao. At some point, Zetsu's Spore Technique activated while they fled, but they manage to free themselves from the spore-induced clones.[8]

After alerting Danzō that they were being followed by Ao, he was instructed by him to stop him, and either retrieve or destroy the Byakugan he possessed. Fū laid several traps, including a cursed ragdoll, which attacked Ao, forcing the Kiri-nin to retaliate. This activated the curse and Ao became trapped in the puppet while Fū took control of Ao's body.[9] However, in his attempt to remove the eye, Ao's seal decals were activated, and covered the eye. After trying to remove the tags with a kunai, Fū sensed the Fifth Mizukage and Chōjūrō coming and proceeded to bind Ao's hands and tie a kama to a tree branch, telling Ao that he was going to decapitate him so that he could simply take his head. He then jumped down towards the kama, but the Mizukage arrived in time to catch him. Acting as Ao, Fū explained that his body was being controlled, but apologised to her and Chōjūrō for worrying them and asks her to untie his hands. The Mizukage prepared to do so, while also offering to remove the seal from the Byakugan, to which Fū agreed, planning to crush Ao's eye as soon as this was done. However, the Mizukage left his hands bound, and asks Chōjūrō to lend her the Hiramekarei, explaining that the real Ao would have never apologised to Chōjūrō in such a manner, and that Ao also knew full-well that even she wasn't able to remove the seal over his eye. Fū then insulted the Mizukage for seeing through his deception before leaving Ao's body.[10]

Returning to his body, Fū apologises as the mission ended in failure. Arriving at the Samurai Bridge, the group is ambushed by Tobi. While Danzō prepared for battle, he has Fū and Torune distract Tobi to buy him enough time to undo his Sealing Arm Braces. As Torune attacks Tobi, Fū sneaks behind Tobi and tries to use the Mind Body Switch Technique on him, but fails to do so, as Tobi phases through a pillar. Suddenly, Tobi appears behind Fū, who quickly reacts and slashes at him with his tantō, only for the attack to phase through Tobi. Tobi grabs Fū and attempts to hit him, but Torune throws a kunai at him, forcing Tobi to release Fū and go intangible. Fū tries to bait Tobi into attacking him so that Torune can take the opportunity to infect him with his rinkaichū. Fū attacks Tobi, but slips pass him, and Tobi pretends to counter-attack. Torune then runs to hit Tobi, but, as part of his plan, Tobi goes intangible, causing Torune to hit Fū instead. Clutching his arm in pain, Torune extracts the bugs, and cures Fū. Before they could battle further, Tobi quickly transports both of them to another dimension.[11]

To alleviate some of his unease surrounding Kabuto Yakushi's motives, Tobi demanded that he demonstrate the Summoning: Impure World Reincarnation technique to him. Lacking the necessary sacrifices however, Tobi released the captive Fū, and Torune. Both mentally, and physically restrained, Torune was killed by Tobi, who then ordered that Fū be used to reincarnate the former. Obliging, Kabuto began the ritual whilst Fū remained motionless at the very centre of the ritual's seal. As ash and dirt begin to surround him, he cried out before both his body and soul are replaced by those of Torune.[12]

Wanting a straight-laced, no-nonsense character, Kishimoto noted that it took some time to harden Fū's expression to what it is now. Because he is expressionless, the air of danger around him is even further accentuated. To this effect, Kishimoto noted that he then gave Fū powerful insight to bring out an air of deterrence. Earlier on in the conception stages, Kishimoto had Fū carry his mask strapped to his waist. 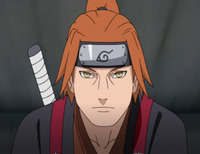