Konohamaru wakes up Naruto, claiming that he is now appointed leader of the Konohamaru Corps and that his mission is to find the crimson four leaf clover, located in a dangerous and forbidden place called Akagahara. As Konohamaru explains, it becomes clear that he wants to impress a girl, Kaede Yoshino, who has caught his attention at the academy. However this girl is quitting the academy and moving to a different village because her father has to go on a mission. Believing the flower will get her back, due to a legend claiming the wish of the finder comes true, the two set out. On their way they meet Sasuke and Sakura, waiting for Kakashi, whom they later inform on the plan of the pair. After activating almost every trap on the way to the clover (including falling into a hole, tripping a wire that launches kunai and stepping on explosive mines), they find that there are many clovers but none seem to have four leaves. When Konohamaru discovers one beneath a statue, the pair are attacked by puppets. It is only when Sasuke, Sakura and Kakashi arrive that they are rescued by placing the statue back to its original position. Then one of the leaves fell off the clover Konohamaru picked. Konohamaru still gave the clover to Kaede, and she kissed him on the cheek. 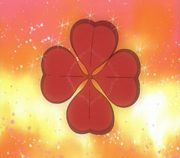