The user spits flames from their mouth that, like a dragon's, quickly travel forward in a straight direction. Upon contact with a target, the affected area is engulfed in flames. Whereas the Great Fireball Technique will burn everything in the vicinity, the Dragon Fire Technique is more narrowly focused at its initial target, likened to a projectile.[1] When first used by Sasuke Uchiha, he uses wire strings to guide the Dragon Fire Technique to his target's face.[2] The anime later shows it burning through a line of enemies, with the flames moving from one enemy to the next.[3] Despite these two cases, the Dragon Fire Technique seemingly does not require a medium through which to be transmitted. 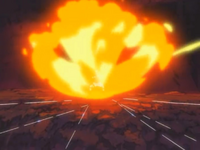