The user kneads chakra in their body and turns it into fire, which they then expel from their mouth; the more chakra they use, the more flames that are produced. Sometimes the flames lack a distinct shape, being only a stream, but more often than not they take the form of a giant orb that maintains its shape until hitting a target. Upon impact, the fireball is powerful enough to crater the ground and vaporise the surroundings.[1] Against living targets, the fireball can cause extensive burns.

The Great Fireball Technique was created by the Uchiha clan, and over time became one of their signature abilities.[2] The Uchiha in fact used the Great Fireball Technique as a coming of age rite, with members not being considered true adults until they learned to perform it.[3] In keeping with this, the manga has only ever shown Uchiha using this technique; the anime at times depicts non-Uchiha performing it. 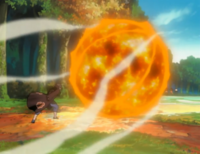