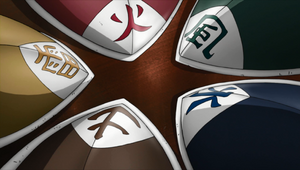 A Five Kage Summit (五影会談, Gokage Kaidan, literally meaning: Five Shadow Summit) is a meeting of all the Kage to discuss matters affecting their respective countries and the world at large. When a Kage wishes to meet with their fellow Kage, they notify the others of a time and place to convene as well as how many bodyguards they may bring. Travel and mission restrictions are placed on all shinobi who will not be attending the meeting in the days before, during, and after so that no village can work against another while their Kage are gone.

The first ever Kage Summit was convened in an unknown location by the First Hokage. In an attempt to balance the power between the villages and as a sign of goodwill, Konohagakure intended to distribute the tailed beasts it had acquired to the other villages. The Kazekage, however, noted that Sunagakure already had a tailed beast within their possession and instead asked for an alternative payment of a portion of the fertile land of the Land of Fire, their closest neighbour, and 30% of the asking price from each of the tailed beasts that the other nations would pay for. Most present were outraged by this and threatened war against Sunagakure, but the Hokage was able to quell their rage by speaking of his hopes for the future of the shinobi.[1]

Many decades after the first Kage Summit, another is convened in the Land of Iron by the Fourth Raikage. As a result of Akatsuki's growing activity in recent months to capture the tailed beasts and their jinchūriki, the Raikage wishes for the villages to unite against Akatsuki. Because many of the villages had employed Akatsuki in the past, the Raikage asks the Land of Iron's leader, Mifune, to mediate. Decades of conflict and competition between their villages make some of the Kage reluctant to cooperate or to admit Akatsuki is a real problem. It is only from the Hokage's revelation that Akatsuki is led by "Madara Uchiha" that the Kage see a threat.

Mifune suggests that the Kage form a coalition to oppose Akatsuki with the Hokage as its leader, citing the fact that only Konoha's tailed beast has yet to be captured. It is soon discovered that the Hokage is manipulating Mifune, prompting him to flee with his bodyguards when the meeting is attacked by Taka, an Akatsuki-affiliate. "Madara" confronts the remaining Kage shortly afterwards and, after failing to convince them to surrender their jinchūriki, he declares the start of the Fourth Shinobi World War. The four Kage and Mifune band together as the Allied Shinobi Forces in order to confront Akatsuki, with the Raikage as its leader. They also decide to invite Konoha's help by approaching Kakashi Hatake, not trusting the Hokage in light of his actions.

Two years after the Fourth Shinobi World War ends, the Sixth Hokage called an emergency Kage Summit to discuss how to handle the imminent crashing of the Moon into the Earth. At the first and apparently only one of these meeting where the Kage meet in person, they are given clocks to help them plan countermeasures and get their people to safety. In the final hours of the crisis the Kage have several telecommuted conferences to discuss efforts to stop the moon. Because Konoha's Hanabi Rescue Team is on the moon, all but the Fourth Raikage agree to delay Kumo's Chakra Cannon from destroying it so that the team, specifically Naruto Uzumaki, can have a chance to complete their mission.

In the months following the events of the moon collision, a summit was held in Konoha. Before discussing matters, Kakashi requested that they don't go overboard with their gifts for Naruto and Hinata Hyūga's upcoming wedding. As the conference ran long, Gaara decided to stay the night in Konoha.

Several years later, a Kage Summit is convened in Konohagakure by the Seventh Hokage. One of the matters brought up by Sasuke Uchiha was Kaguya Ōtsutsuki's reasoning for the creation of her White Zetsu Army, which he hypothesised that there is possibly a bigger threat than her which could appear promptly. It was decided that the information was to be kept secret between the Kage and others present, in order to not cause a panic.[2]

Several years after the Fourth Shinobi World War, another Kage Summit is convened in Konohagakure by the Seventh Hokage. It is unknown what matters were discussed at the summit. It seems that in this version of the meeting, the tensions between the villages have practically become nonexistent, even to a point where the Kage of the villages who once utterly despised each other would agree to meet within one of the Kage's hidden villages in a seemingly casual manner.[3]

For the first meeting following the Ōtsutsuki attack on the Chūnin Exams in Konoha, a Kage Summit is held, with the main agenda being the Ōtsutsuki clan. Due to the importance of the topic, the retired kage participated in the meeting.

Some time following the Ōtsutsuki attack on the Chūnin Exams, a Kage Summit is held.[4]

Following Naruto learning that Iwagakure intended to attack the Land of Flowers, a summit is convened.[4]

Upon Kawaki being taken into Konoha's custody, the Seventh Hokage convens a summit in Konoha to discuss the boy and Kara.