To improve their chakra control, and thus the effectiveness of their techniques, Kakashi teaches Team 7 how to climb trees. Naruto fails completely, Sasuke can only make it halfway up, and Sakura is able to make it to the top on her first try. After repeated failures, Naruto asks Sakura for tips. Meanwhile, Zabuza recovers from his fight with Kakashi. Gatō approaches him intending to kill him for his failure, but is stopped by Haku, who breaks Gatō's arm in punishment for even considering touching Zabuza. Zabuza assures Gatō that he will finish the job in a week's time.

Because she has nothing to gain from additional chakra control training, Sakura escorts Tazuna around the Land of Waves and sees the poverty the country has been reduced to because of Gatō's control. Meanwhile, Naruto and Sasuke continue trying to climb trees. Despite his earlier failures, Naruto is catching up to Sasuke. Concerned that Naruto will beat him, Sasuke asks that he share whatever advice Sakura had given him earlier. Naruto refuses, and the two begin a competition the keeps going even while Team 7 is having dinner with Tazuna and his family. When Inari, Tazuna's grandson, becomes upset by their efforts, Tazuna explains how Inari and the rest of the country lost hope in their freedom.

Years earlier, Inari met a man named Kaiza, a visitor to the Land of Waves. The two grew close and Inari came to consider Kaiza as a father. Sometime later, when a heavy storm season threatened to break a dam which would flood the country, Kaiza risked his life to seal the dam, in the process becoming the country's hero. When Gatō arrived in the country and began his monopoly over all forms of industries, Kaiza stood up to him and was executed for his actions. Inari and the rest of the country lost hope. Naruto, determined to save the country and prove to Inari that hope still exists, leads to resume his training.

Naruto, while resting from all the training he has done, is awoken by Haku. Unaware that he is the masked boy he met during the fight with Zabuza, Naruto explains that he was training to get stronger. Haku remarks that people become truly strong when they're protecting someone precious to them, something that Naruto can agree with. They part ways and Naruto continues his training, finally managing to climb to the top of the tree.

Naruto returns to Tazuna's home after an intense day of training. Frustrated by all that Naruto is putting himself through, Inari yells at Naruto that he is too happy to free the Land of Waves from Gatō. Naruto tells him to grow up, and Inari storms out. Kakashi approaches Inari and tells him about Naruto's background; how he grew up without family or friends, but chose to not feel sorry for himself and solve problems his own way. The next day, the rest of Team 7 leaves Naruto behind so that he can rest and escort Tazuna to the bridge he is building. There they are met by Zabuza and Haku.

Two of Gatō's henchmen attack Tazuna's home, planning to kidnap his daughter, Tsunami in order to force Tazuna to stop building the bridge. They prepare to kill Inari, but Tsunami promises to kill herself if they attempted to harm him. Touched by the bravery of his mother, his grandfather, and Team 7, Inari stands up for himself and tries to stop the kidnappers. Before they can cut them down, Naruto suddenly appears to save Inari and defeat them both. He congratulates Inari for the courage it took to risk his life to save his mother, and then leaves to join the rest of his team.

Sasuke and Haku begin fighting. Although Haku is a skilled opponent, Sasuke is able to make good use of what he learned during his training and pushes Haku to his limits. Irritated that Sasuke is doing so well, Haku uses his trump card: Demonic Mirroring Ice Crystals. Sasuke is trapped in a prison of ice, leaving him open to Haku's attacks. Kakashi attempts to come to his aid but is stopped by Zabuza. With Sasuke apparently doomed, Naruto appears and lands a sneak attack on Haku.

Zabuza tries to kill Naruto but is stopped by Haku, who asks that he be allowed to fight him by himself. Zabuza agrees. Naruto, planning to help Sasuke, enters the ice prison, in the process becoming trapped just like Sasuke. The two try to attack Haku but their efforts are quickly neutralised because of Haku's extreme speed. Haku asks that they stop trying to escape since he has no interest in killing them. He will if he needs to if it means preserving his dreams of being useful to Zabuza. Worried about what will happen to Naruto and Sasuke, Kakashi prepares to fight Zabuza so that he can provide assistance.

Zabuza attacks Kakashi before he has a chance to reveal his Sharingan. Kakashi blocks the attack but Zabuza is unconcerned, having learned from their previous encounter. Haku had watched their battle and realised that the Sharingan apparent mind reading abilities were only an illusion. To avoid falling prey to the same trick twice, Zabuza coats the area in a thick mist to reduce visibility and also fights with his eyes closed, both factors making it impossible for the Sharingan to hypnotise him. Kakashi having lost his advantage, Zabuza takes the opportunity to try and kill Tazuna. Kakashi appears before Tazuna at the last second to block the attack.

Sasuke and Naruto are becoming exhausted by Haku's relentless attacks. However, the attacks are becoming increasingly less successful, with Sasuke slowly being able to not only follow Haku's fast movements but to react and avoid the attacks entirely. Realising that this is because Sasuke has awakened his own Sharingan eyes, Haku moves to kill Naruto so that he will have an easier time fighting Sasuke. Meanwhile, Kakashi has been badly wounded by Zabuza. Zabuza points out that he will soon die just like Sasuke and Naruto, but Kakashi has faith in them in their survival. Elsewhere, Naruto finds that Sasuke has used himself as a shield against Haku's attack. Naruto asks why Sasuke would do that, but Sasuke does not know why. He laments that he did not have a chance to kill his brother before seeming to die. Enraged by the loss of Sasuke, Naruto vows to kill Haku. 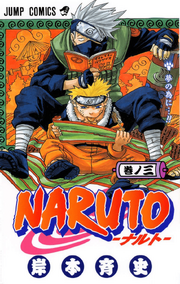