The Forbidden Individual Curse Tag is a juinjutsu utilised by Madara Uchiha.

The cursed seal is placed directly on the target's heart and by design, prevents the branded individual from taking their own lives or removing the cursed seal themselves. A direct strike to the heart appears to be able to remove the seal — albeit risking one's life in the process. According to Obito Uchiha, the cursed seal also interfered with him becoming the Ten-Tails' jinchūriki.[2] 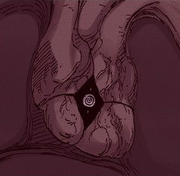