One of the "Imitation Beast Ninja Arts" (擬獣忍法, Gijū Ninpō), this technique allows the user to move in the same way as an animal. By surrounding their body with chakra and moving about on all fours, the user's speed and accuracy are significantly enhanced, which in turn makes their attacks more damaging. Hit-and-run tactics are the most effective form of attack while using this technique, as this ensures the user is constantly moving, thus making it difficult for opponents to follow their movements.[1]

The Four Legs Technique is a favourite of of the Inuzuka clan, enabling its members to move in the same way as their ninken partners. Upon activating this technique, Inuzuka gain a more feral appearance: their canine teeth lengthen, their finger and toenails become claw-like, and their pupils turn to slits.[2] Inuzuka will often make using the Four Legs Technique their first priority in a fight, which in turn tends to make it a prerequisite for many of their other jutsu; Kiba Inuzuka refers to the encompassing fighting style as "Beast Human Taijutsu" (獣人体術, Jūjin Taijutsu, literally meaning: Beast Human Body Technique).[3] 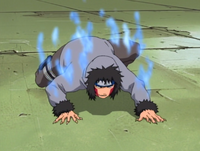