Boruto meets Tentō at the Konoha Mountain Villa and soon realises that the daimyō has rented out the entire hotel. Tentō soon dismisses this trail of conversation, as he is way more interested in seeing Boruto use ninjutsu. While hesitant at first, Boruto displays the use of the Shadow Clone Technique to Tentō, and while he was momentarily awed, he soon lamented the fact that he heard the Seventh Hokage could produce thousands of clones compared to Boruto's five. Now prompted to display the Transformation Technique, Boruto opts for shock value and instead uses the Sexy Technique followed by the Harem Technique. This, however, has no effect on Tentō other than causing him to launch into a fit of laughter. After the laughter subsides, Tentō plainly states that this was nothing unusual to him because women were usually parading through his house.

This laughter prompts Boruto to chide Tentō, stating that he probably had no friends. Unperturbed, Tentō matter-of-factly says that Boruto was his friend and that he had always wanted a shinobi for a friend that was his own age. Now excited by the prospect, Tentō decides to show his Extreme: Shinobi Picture Scrolls card collection to Boruto, who is equally amazed by the collection. Tentō tells Boruto that he can take whichever card he wants, especially after Boruto realises that Tentō has an extremely rare card that he has been after for the longest time. Tentō explains that it isn't hard for him to collect the cards (all of which he has in duplicates) since his father gifted him with a no-limit credit card for his birthday. He introduces a catch, however: Boruto must teach him how to use ninjutsu. Boruto agrees to train him but declines the collectable card as payment, stating that he would rather try on his own to get the card. Soon after shurikenjutsu training gets underway, Tentō becomes demotivated, which leads the two to have a deeper conversation on why Tentō wants to learn ninjutsu: an attempt to get his father — who holds great admiration for shinobi — to notice him. Resonating with him, Boruto rallies Tentō to try harder before they are stopped by Yamaoka, who disapproves of the activity deeming it beneath the heir to a daimyō. Persuaded, Yamaoka allows Tentō to continue his training while in Konohagakure, which soon reveals progress, and Tentō is able to hit the centre of a mark. While on a well-earned break, Boruto gives Tentō his collectable Seventh Hokage card and shares his own experience with being acknowledged with the overjoyed young man and his dream to become someone who can support the Hokage, like Sasuke Uchiha. Sometime later, as the daimyō's delegation prepares to leave, Tentō asks if he can see Boruto again, to which the latter replies that it was a rhetorical question between friends. Meanwhile, a member of the Mujina Bandits watches on all the while communicating with his boss Shojoji who it turns out is disguised as Yamaoka. 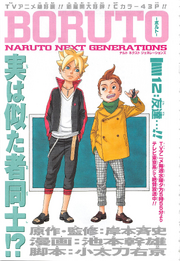