Fusō (扶桑, Fusō) was a nurse and a citizen of Amegakure, where she lived in a small village with her son and husband.

During the Second Shinobi World War, Fusō and her husband Ise were providing humanitarian aid. One night during the war, Fusō and her family were hiding in their battle-damaged house when Konoha ninja broke in looking for food. Fusō and her family tried to sneak away but when they were detected she and Ise brought the attention to themselves to give Nagato a chance to escape. The Konoha ninja, assuming the couple were enemy ninja, attacked and quickly killed both of them.[2]

Witnessing this, Nagato unknowingly awakened his Rinnegan, and he subsequently killed the two Konoha-nin. Nagato buried his parents before leaving to search for food. The death of his parents is the first great tragedy of his life, and in his eyes evidence that the peace Konoha preaches comes at the cost of others' lives.

As a nurse, working alongside her husband to give aid to others in times of war, Fusō was a very compassionate woman. She loved her son very much, willing to sacrifice her own life to allow Nagato to escape.

Fusō had long smooth red hair, a trait from the Uzumaki clan, and dark-coloured eyes. She wore simple light-brown clothing with a dark sash and brown sandals. 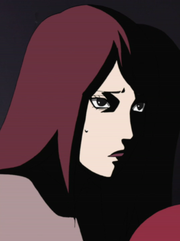