Gama (蝦蟇, Gama) is the first toad named in the series, debuting alongside Jiraiya. This toad seems to be the keeper of the Toad Summoning contract scroll.

Gama has not yet been seen talking, only croaking once or twice and mainly in the anime, so his personality is mostly unknown. However, he seems to be deeply loyal to Jiraiya, following him around and immediately obeying his orders; he was also the only summon shown to strike the same pose as Jiraiya.

Gama is a very large toad, enough for Jiraiya to ride on his back. His orange skin is covered in blue markings, he has bandages wrapped around his body and left foreleg, and wears a necklace with seven large beads on it, with the kanji for "loyalty" (忠, chū) on the central, largest one. It is also shown that he has three swirl-like marking in the middle of his left palm which are similar to the one's sometimes portrayed in Jiraiya's. In battle, he is almost always seen wearing samurai armour, composed of a plate cuirass and arm-guards paired with traditional samurai pauldrons.

Gama seems to be skilled in taijutsu, which benefits from his large size and toad traits, as seen when smashing around a skilled ninja such as Ebisu with his long, extendable tongue. He also appears to possess considerable strength, being capable of blocking an attack from Kisame Hoshigaki, known for having immense strength, with his armour, which prevented him from having his chakra absorbed by Kisame's Samehada.

Gama is first summoned to tongue-whip Ebisu for annoying Jiraiya at the hot springs.[1] He's summoned again soon afterwards to give the contract scroll for the toads to Naruto Uzumaki. There he stayed for a little while, watching Naruto fail to summon an actual toad.

As Kisame attempts to cut off Naruto's arms so he wouldn't put up a fight, Jiraiya arrives in time to summon Gama who, clad in armour, blocks the attack.

In the anime, he is summoned to save Naruto, Sakura, and Sasame from Kagerō's Earth Release: Antlion Technique.

Gutsy Master and Student: The Training

Gama is seen in a flashback, shown to have taken part in Naruto's training between Part I and Part II. He, Naruto, Jiraiya and Gamariki are seen meditating underneath a waterfall. 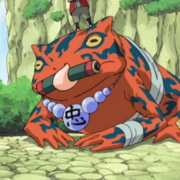