Due to not having the combat ability to yet form a contract with shinobi, Gamatama is entrusted as a name-registration clerk on Mount Myōboku.[1]

Gamatama has a very small body. He has black irides with yellow sclerae. Gamatama also has pink skin covering the upper half of his body while his underside is white. As a tadpole, he still has a tail. 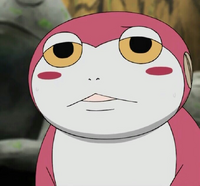