Gatō (ガトー, Gatō) was a shipping magnate and founder of Gatō Company. He also was secretly a drug dealer as well as the owner of a smuggling business and attempted to take control of the Land of Waves.

Gatō was a powerful shipping magnate whose shipping company was actually a front for much shadier activities, such as smuggling contraband and trafficking drugs. He took control of the Land of Waves' shipping routes and created a monopoly by isolating the country from the outside world, preventing free sea-freighting and turning it into an impoverished, hunger-stricken country in the process. He was a cruel man, responsible for humiliating and killing Kaiza in public for standing up to him. Kaiza's death immensely demoralised the people of Wave, to the point that they no longer had the courage to stand up to Gatō. Gatō was protected by two bodyguards, Zōri and Waraji.

Gatō was a corrupt businessman, characterised by extreme cruelty and greed. If he had even the slightest chance of getting profit, nothing would stop him. He constantly prioritised financial success over any other motives and emotions. He was willing to break prior contracts and agreements in order to save money.

Gatō was very ruthless, and dealt harshly with his enemies, brutally executing anyone who crossed his path. To this end, he had no qualms over killing and harming innocent people, as he ordered Tsunami to be taken as hostage to stop Tazuna. He can also be cowardly and grudging, as he kicked a dead Haku in the face for injuring his arm earlier, and then cowering away when Zabuza charged at him.

Gatō has shaggy brown hair and sports a pair of small, circular black glasses. He wears a black suit with a purple tie, a yellow shirt underneath his coat and closed-toed shoes.

Gatō hired Zabuza Momochi and his men to assassinate Tazuna, because the bridge he was building posed a threat to Gatō's control of Wave's economy. After Zabuza's first defeat at the hands of Kakashi Hatake and his recently formed Team 7, Gatō visited him and when Haku grabbed his arm, he said that if they screw up again they will be out of his organisation. During Zabuza's second fight with Kakashi (who was hired to defend Tazuna), Zabuza's arms were broken, Gatō arrived with a group of thugs, intent on killing Zabuza so that he would not have to pay him for his services. Since Zabuza was still able to wield a kunai in his mouth, this mistake cost Gatō his life as he was swiftly beheaded by the enraged Zabuza. Due to Zabuza's severe injuries, he passed away and the renegades, who tried to loot the Land of Waves because they lost their source of income, were scared away by Kakashi, Naruto, and the combined force of the villagers. 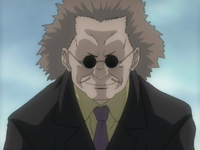