Gensui Amagiri (天霧ゲンスイ, Amagiri Gensui) is a shinobi from Yumegakure and the main antagonist that appears in Naruto Shippūden: Kizuna Drive. He's the father of Taisa Amagiri.

Gensui showed to be a vengeful and ruthless ninja, evident in his pursuit of vengeance against the Tenrō clan for their persecution and banishment of the Amagiri clan years earlier. This ruthlessness was taken to extremes as he had no qualms about using even his own son, after the latter rejected his goals, as a tool for revenge.

He also proved to be an extremely manipulative man, as he tricked his entire village into believing that they were under attack by the Nine-Tails and that he himself had perished battling it to the death. This led to Yumegakure blaming Konohagakure, and in particular Naruto Uzumaki, for the destruction of their village and death of countless villagers. He was shown not to be above forming an alliance with Danzō to achieve his goals.

All his schemes and manipulations had the one goal of unifying Yumegakure behind the Amagiri through tragedy caused by the Three-Headed Guardian Beast and blaming it on the Tenrō, thus settling the score. Using the power of the Three Heads and his own False Tailed Beasts, he even intended to control the world, making it a utopia for the Amagiri.

Gensui is an elderly man with very long white hair some of which is pointed up and the rest is straight and tied into two loose, thick ponytails behind his back and has two strands framing his face and a small goatee. He wears a pointed hat that resembles a kazaori eboshi and his face is covered in red markings and has several wrinkles. On his forehead, he has a scar running through one of these red marks.

He wears a samurai-like attire that spots reddish-pink and purple colours with iron and gold platings. He wears brown pants tucked in bandages wrapped around his lower legs and the unique sandals of the Amagiri clan.

Gensui is a cunning, intelligent and knowledgeable man, which was shown by how he had manipulated his entire village and its leader, to release the Three-Heads.

Gensui showed prowess in a variety of ninjutsu. He is shown capable of using a telekinetic ability, which enables him to manipulate objects out of his reach and even allows for flight or a variation of limited levitation.

During his battle with the Fake-Nine-Tails, Gensui was seen using fūinjutsu. He has been shown capable of using a numerous amount of sealing tags and jutsu to counter and negate an attack that easily levelled his village. He has shown enough knowledge to seal and summon anything that enters the vicinity of one of his seals. He was also shown using an enormous explosive tag.

His most fearsome technique, however, is his ability to make others transform into a False-Tailed Beast. Each having the full potency and abilities of the Tailed-Beast being mimicked. This is achieved by placing a seal placed on the victim's forehead. During the transformation, the victim is completely under Gensui's control.

Gensui proved skilled in taijutsu, evident when he quickly broke free of Ryuka's hold of him, despite having a kunai at his throat or when he put a Yumegakure shinobi in an arm lock. 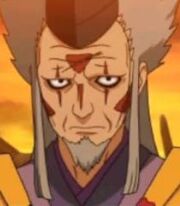