"The Breakdown of Negotiations…!!"

"Gift" (贈り物, Okurimono, Viz: A Present) is chapter 26 of the Boruto manga.

Kawaki dreams back to when Jigen adopted him. He remembers meeting Amado while watching a group of children in a growth apparatus. After several failures, Amado states there are only two left. Jigen later confirms to him Kawaki is the last child, reassuring Kawaki that if he accepts him as a father, he won't feel empty anymore, and that when they're truly parent and child, he'll give him a valuable gift. Kawaki wakes up in Konoha, with Naruto, Shikamaru, and Konohamaru in his room. Despite Naruto and Konohamaru trying to ease him, Kawaki immediately tries to escape, but is paralysed by Shikamaru, who assures him if they wanted to do anything with him, they'd already have done it. Naruto introduces himself to Kawaki, and thinks back to his earlier discussion with Shikamaru about the possible dangers of keeping Kawaki in the village. Naruto wants to personally oversee Kawaki, owning to his own experiences of isolation as a jinchūriki.

Shikamaru reminds him the threat of Kara means the decision isn't his alone. Katasuke informs what he understands so far about the scientific ninja tools in Kawaki's body and the Kāma to the Five Kage and their advisers. The Kage consider Kawaki to be too dangerous to be ignored, with Naruto being adamant in staying by Kawaki's side at all times, even during their meeting. Kurotsuchi wonders which Naruto is a shadow clone. The other Kage agree with Naruto's plan, but ask about the Kāma, knowing Boruto also possesses it. Naruto says they don't know much, and hope that Boruto having it will help ease Kawaki. Naruto walks Kawaki to his home, but Kawaki tries to escape. When Kawaki stops running, Naruto is there waiting him, confusing him. At Naruto's home, Hinata offers him tea, and when Naruto asks his name, he says he doesn't have intel on Kara, still acting rude. Naruto tries to remain civil. When Naruto stands up, Kawaki flips the table, breaking a flower vase, trying to make a run for it. Naruto powers up, and dares Kawaki to try getting off his sight, making it very clear he won't let that happen until his background is clearer to him, as it's his duty to keep the village safe. Kawaki thinks Naruto might be stronger than Jigen, and considers it useless trying to get away from him. Naruto powers down when Himawari enters the room, and Boruto arrives home. Boruto and Kawaki recognise each other, and Naruto explains to Boruto Kawaki will be staying for a while. Boruto gets angry when he sees Kawaki broke the flower vase, which Himawari made as a gift to their mother. Kawaki barely apologises, and the boys introduce themselves to one another, cursing at each other. 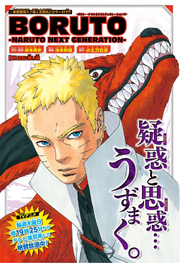