Gokai (ゴカイ, Gokai) is a pirate from the Funato Clan.

Gokai was already part of the Funato clan when Araumi Funato returned from one of his raids with an orphan named Tenma, who he would take in as his son.

Gokai is a rational man who tries to cool off the short-tempered Funamushi, but due to his lower rank in the team, he has to obey his leader, who does not listen to Gokai's ideas. Like all other soldiers, Gokai is loyal to the clan and respects Funamushi, despite his attempts to strangle Gokai and, in principle, his dismissive attitude. This loyalty extends to his son Kobuna, aiding him in his attempt to get revenge on Boruto. He is also shown to be very loyal to Seiren, and encouraged the squad to make sacrifices for her.

Gokai is a man of medium height with short dark hair. He wears the standard Funato pirate outfit, consisting of a grey vest and pants, and has a signature purple tattoo on his head.

Like many soldiers in the Funato Clan, he has capable skill in Water Release, able to imprison people in it. He demonstrated great physical strength, easily carrying Funamushi, who is twice as large, on his shoulder. He also has leadership qualities and appears to be the second highest ranking member of the team, having taken command after Funamushi's defeat. During the second attack on Kagura's village, Gokai wield a spear, and used his sword to cut the ropes on the defensive fences. He has demonstrated good skills in taijutsu, fighting on equal terms with Boruto Uzumaki at close range, as well as skilful use of kunai, attacking the enemy with a large number of them.

Main article: Great Sea Battle of Kirigakure Arc Gokai had joined Funamushi's elite squad of Funato soldiers to attack Kirigakure while the rest of the clan would distract the Mizukage's forces at sea. As Gokai and the elite squad headed to a nearby village for supplies, a Funato scout informed Funamushi that the bridges ahead had been cut down.

Later, when the group of shinobi led by Kagura Karatachi was ambushed by the Funato, Gokai informed Funamushi of their confrontation with the enemy. After the shinobi retreated from their short clash, Gokai suggested to Funamushi not to pursue them due to them having a home advantage at the village. Funamushi choked him in response, refusing to let an opportunity to avenge Seiren slip by.

Gokai and the elite squad confronted the shinobi again at the village, who overwhelmed them with their teamwork. When Funamushi absorbed the blood of two Funato soldiers to form another water tornado, Gokai and two other Funato soldiers trapped some of the shinobi in water prisons, leaving them vulnerable to Funamushi's jutsu. After Funamushi stabbed Kagura, the shinobi retaliated and Boruto Uzumaki hit Funamushi with his Rasengan. Gokai took command and had the Funato retreat. Funamushi refused, wanting to fulfil his revenge, but could not go on further due to his injuries and was carried off by Gokai as they fell back.

At camp, Gokai listened to Funamushi's wish to take revenge on Boruto, but warned that doing so might jeopardise their plans to ambush Kirigakure later, making note of their losses and wounded in the previous battle. Later, Gokai handed Funamushi Araumi's latest orders, which included calling off Funamushi's mission and news of no change in Seiren's condition, enraging Funamushi, who chose to ignore the orders and carry on the mission.

At night, when Funamushi decided to attack in the morning, Gokai pointed out their diminished numbers and the fact Funamushi was still injured from the previous battle. Funamushi countered that since it's been a day since he ignored the retreat orders from Araumi, he'll likely force them to retreat, so their window of opportunity for avenging Seiren is closing. When the battle began, Gokai led the charge, cutting through the barriers, and was among those who fought against Boruto and Kawaki. After Buntan killed Funamushi, Gokai and a small number of surviving Funato carried his body off the village. Upon returning to the Funato base with Funamushi's corpse, Gokai informed the Funato clan and Kobuna of what happened. At Kobuna's request, Gokai tattooed him with the Funato markings, just as his father had.

Two days later, Gokai returned with Kobuna to kill Boruto in order to avenge Funamushi. When the rest of the Team 7 was alerted of their presence during their brief fight with Boruto, Gokai and Kobuna retreated per the former's suggestion. Gokai was later present when Team 7 boarded a Funato ship to try convincing Ikada to stop the war. When talking things out proved useless, Boruto offered his life to end the war. Ikada agreed to it if Boruto's team-mates didn't interfere or sought revenge after. Boruto managed to get them to promise to honour his choice. Gokai insisted that as the one responsible for Funamushi's death, Boruto didn't deserve a quick death. He and other soldiers began beating Boruto up, who didn't retaliate. When Boruto jumped into the sea himself after Kobuna hesitated to push him, and his team-mates stood by their promise, Ikada himself saved Boruto and declared the war over. Gokai disapproved of it, stressing that their fallen friends had to be avenged, but many of the soldiers also wanted to stop fighting so as not to let children like Kobuna get involved in a battlefield and lose more loved ones.

In the aftermath of the war, Gokai, Kobuna and his mother visited Funamushi's grave as Kobuna decided that he would become stronger like his father to protect everyone. Gokai offered to help raise Kobuna himself, which he happily accepted. 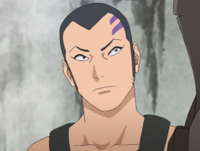