Granny Chiyo and Sakura (チヨバアとサクラ, Chiyo-Baa to Sakura) is volume 30 of the Naruto manga.

Sasori and Deidara are instructed to deal with Team 7 and Team Guy and to capture Naruto, the Nine-Tailed Demon Fox's jinchūriki. Before they can break into the Akatsuki lair, Team 7 and Team Guy must bring down the barrier blocking their entrance. The five tags that create the barrier need to be removed simultaneously, so Team Guy splits up, locates the tags, and does so. They are immediately attacked by exact copies of themselves. Meanwhile, Team 7 breaks into the base and finds Sasori and Deidara with Gaara's body.

Deidara tells Team 7 that they are too late; Gaara is dead. Naruto, enraged, attacks them, but Deidara merely flies off with Gaara's body. Naruto pursues him to get back Gaara's body and Kakashi goes with him, instructing Chiyo and Sakura to keep Sasori busy until Team Guy returns. Team Guy, however, is preoccupied with fighting their own duplicates. Sakura is concerned about fighting Sasori by themselves, but Chiyo tells her not to worry. Sasori removes his Akatsuki cloak, revealing a scorpion-like body, and states his intentions to kill them both.

Chiyo informs Sakura that Sasori is hiding within Hiruko, a puppet used as his armour. Sakura believes that Chiyo, as Sasori's grandmother, will have useful knowledge of Sasori's puppets, but they have been apart for too long for this to be the case. They must also be wary of the fact that Sasori's entire arsenal is likely coated with poison. Chiyo is nevertheless confident in their success. Meanwhile, Deidara informs Naruto and Kakashi that Sasori is stronger than he is and suggests they go back to help. Sasori attacks, but Sakura dodges his attacks with unusual dexterity and destroys Hiruko.

In Sunagakure, the Suna council discusses Gaara's kidnapping. Some councillors suggest that this has been a blessing, an opportunity to finally get rid of the village's jinchūriki. Others at least agree that it would not be worth looking for Gaara, remembering the complications that arose years earlier when Sunagakure went searching for the Third Kazekage. Elsewhere, Naruto attacks Deidara who, after dodging the attack, points out how peculiar it is for anyone to want Gaara back, jinchūriki typically being despised. Meanwhile, Sasori observes that Chiyo has been controlling Sakura like a puppet to help her dodge attacks. He emerges from the rubble of Hiruko and Chiyo is amazed to find that he still looks like a boy, due to having made himself a puppet. Determined to show his grandmother that he won't be so easy to defeat, he reveals another puppet: the Third Kazekage.

Chiyo realises that Sasori was responsible for the Third Kazekage's disappearance years earlier, adding the deaths of three Kazekage to his resumé. Having since turned the Third into a puppet, Sasori attacks Chiyo and Sakura with it. Although Chiyo controls Sakura like a puppet to help her avoid the Third's poisonous strikes, they are overwhelmed by the puppet's attacks. Chiyo opts to bring out the Mother and Father, the first puppets Sasori created, to block the Third.

The Mother and Father puppets were created by Sasori to look like and serve the function of his own parents, they having died when he was young. Since they were only puppets, they could not give him love and he lost interest in them, leaving them in Chiyo's possession. Chiyo fights the Third Kazekage puppet with them and they are able to overpower it in a normal fight. The Third, having once been human, retains all of the abilities it had in life, including the Iron Sand. Sasori neutralises the puppets with the Iron Sand and attacks Chiyo and Sakura with it.

Chiyo protects herself and Sakura from the Third Kazekage's puppet's Iron Sand with a shield installed in her arm. The Iron Sand nullifies the arm afterwards. Although Chiyo is now handicapped, Sakura realises that Sasori, a puppeteer, can only be defeated by Chiyo, another puppeteer. Since normal puppets can easily be defeated by the Iron Sand, Sakura offers herself as Chiyo's puppet. This increased agility, combined with Sakura's superhuman strength, allows them to counter the Third's attacks.

Temari and Kankurō depart from Sunagakure, intending to finally join the effort to rescue Gaara. Naruto and Kakashi meanwhile are still struggling to get Gaara's body back from Deidara. Elsewhere, Sasori grows tired of Sakura's continued success with dodging the Third Kazekage's attacks, so covers the area in Iron Sand. She is injured and collapses, the Iron Sand having been soaked in Sasori's poison. The Third moves in to finish her off but Sakura gets up at the last minute and destroys the puppet. Sakura reveals to Chiyo that she gave herself the antidote she created earlier, and is now immune to the poison for the next three minutes. She gives the last vial of antidote to Chiyo and encourages her to end the battle before they need to use it too.

Kakashi tries to get Naruto to calm down so that they can team-up against Deidara, suggesting a plan that will utilise both of their strengths. Meanwhile, Sasori cannot understand how Sakura is able to move after being poisoned. When he sees her healing her injuries he realises that she is a medical-nin and that she has perhaps created an antidote. Since this would mean she is no ordinary opponent, Sasori gives up on other puppets and removes his robe, revealing that his body is a puppet too. He attacks Sakura and separates her from Chiyo, and then turns his attention to the defenceless Chiyo. 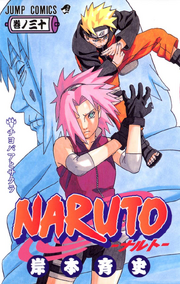