Naruto attacks Itachi but finds that, despite his attempts to avoid it, he has been caught in a genjutsu. Elsewhere, Guy must fight Kisame alone, the rest of Team Guy having been captured. After Kisame attacks him, Guy realises that he must be serious with the battle. He opens the sixth of the Eight Gates and assaults Kisame with his Morning Peacock. Neji manages to free himself and his team just in time to see Kisame's defeat. Afterwards they examine the body but are confused by what they find. 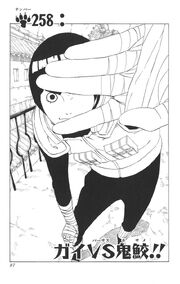