He was a simple farmer and the father of Haku.

Haku's father was a simple farmer. He eventually married a seemingly normal woman, and the two had a son whom they named Haku. The family lived happily and peacefully for many years. However, this changed when Haku discovered he inherited Ice Release kekkei genkai and showed it to his mother. The father saw this from the shadows, realising that his wife was a member of the Yuki clan. The clan carried the kekkei genkai that the villagers of the Land of Water feared and hated, as the ninja who possessed it had caused great tragedies in their civil war. He assembled a mob and, with tears flowing from his eyes, killed his wife in the cottage they built together. He then attempted to kill his son. However, Haku retaliated in self-defence using his Ice nature, killing his father and the mob.

Seemingly a loving father and husband, however once he discovered that his wife and child had kekkei genkai, he tearfully attacked them and even went as far as to attempting to kill his own child, proving that his fear of kekkei genkai users was far more greater than the love he had for his family.

He was a very young man with smooth cheek length black hair and black eyes with no pupils. 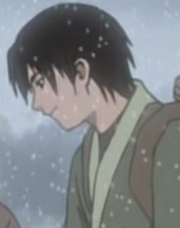