This woman was a member of the Yuki clan as well as Haku's mother.

Due to the kekkei genkai wielding ninja being hated by Kirigakure because of the tragedies they had brought in the war, Haku's mother had to hide her heritage in order to live a peaceful life. She eventually married a local farmer and had a son, whom they named Haku. The couple lived happily and loved their child. However, Haku inherited the Ice Release from his mother, and upon discovering this, he showed it to her proudly. In return, his mother got angry and slapped him, fearing it would ruin the happiness that she worked so hard to build. Though she tearfully apologised to her son and told him not to repeat this demonstration, her husband had already seen it from the shadows. He assembled a mob and, with tears flowing down his eyes, killed his wife in the cottage they built for having the kekkei genkai that they feared and hated so much.

Though she was a loving mother and wife, she had a constant and well-founded fear of being discovered having a kekkei genkai, a fear that (in the anime) led her to strike her son when he showed signs of it, though she apologised immediately afterwards. She seemingly valued peace and happiness together with her family more than anything else.

Haku's mother was a pale-skinned young woman with long, black hair that was loosely tied at the tip with bandages in a manner similar to Neji Hyūga. She also had short bangs that part to the right, brushing over her brows with collarbone-length locks framing her heart-shaped face. Her attire consisted of a simple, light-brown kimono with black edges and a pair of worn, black ankle-boots. Overall, she bore a striking resemblance to her son.

As a Yuki, she possessed the Ice Release kekkei genkai, which was created by combining the water and wind nature transformations. However, she was never seen using this ability due to her fear of it destroying her peaceful life. 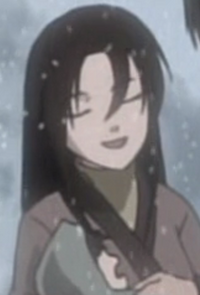