Seals (印, In, English TV: Hand Signs) are used to perform many ninjutsu, genjutsu, and other secret arts other than taijutsu. Invented by Indra Ōtsutsuki[1] in the anime, they are designed to aid people in properly summoning and moulding chakra necessary to perform a technique.[2] There are different sequences of hand seals for every technique, requiring memorisation.

While techniques may require a number of hand seals to work, a skilled ninja can use less or even one to perform the same technique. An example of this is the Water Release: Water Dragon Bullet Technique, which requires a total of 44 hand seals to activate.[3] Tobirama Senju, the Second Hokage, only needed to use one hand seal to complete the technique, a testament to his skill.[4] In fact, by Part II, Sasuke Uchiha has managed to master the Chidori to the point of not needing a single hand seal to invoke it and could use Fire Release techniques with only one hand seal. By reading the hand seals of the opponent, a ninja can predict the nature of the technique to be performed, which is virtually unavoidable if read by the Sharingan.[5][6]

It is also possible for shinobi to form hand seals with one of their hands while using the hand of another person as a substitute for the opposite one. This can happen voluntarily, like when Naruto and Sasuke joined hands to dispel the Infinite Tsukuyomi,[15] or forcefully, such as Anko Mitarashi using Orochimaru's hand for the Twin Snakes Mutual Death Technique,[16] or (in the anime) Obito Uchiha using Kakashi Hatake's for the Fire Release: Great Fireball Technique.[17]

Even rarer than one-handed hand seals, are shinobi who have abandoned this traditional practice altogether, usually because their fighting style revolve around speed and quick reflexes and have developed techniques that require no hand seals to complement this fighting style.

There are twelve basic seals, each one named after an animal of the Chinese zodiac. 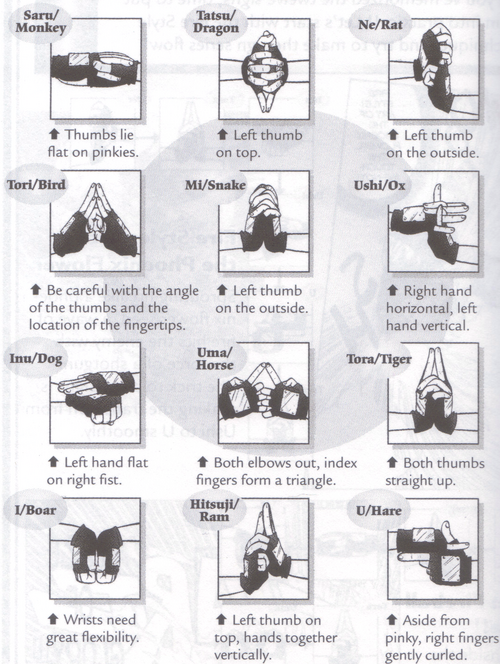 Besides the twelve basic hand seals, there are unique hand seals used for certain techniques. These hand seals are rarely seen, and can be considered unique to specific techniques.

To use an elemental technique through the Kote, one must seal the technique in a scroll and put it inside the device.[23] Depending on the technique's chakra nature, the user must then form one of five one-handed seals to release the technique. These seals are:

The Seal of Confrontation (対立の印, Tairitsu no In, English TV: Spar Sign), which looks like a half-tiger/ram, is the symbol of combat and is a universal sign of engagement between shinobi. It represents half of a seal that might be used to activate a ninjutsu. This motion is often used to concentrate chakra, and many shinobi are seen initiating simple, basic techniques as well as few complex ones after making this seal. Deidara also often used this when he detonated his explosive clay, and Sai and Inojin used it for their Super Beast Imitating Drawing. Madara Uchiha's and Hashirama Senju's statues at the Valley of the End are both forming the Seal of Confrontation whilst facing each other.

The Seal of Reconciliation (和解の印, Wakai no In, English TV: Unison Sign) while not used in battle or for techniques, is used in Traditional Shinobi Sparring as a demonstration that the two opponents are still comrades after sparring.

This seal is most commonly associated with the creation of clones using techniques such as the Shadow Clone Technique, its derivative and the Multiple Wood Release Clone Technique, separate from the basic twelve seals, where index and middle fingers from both hands are crossed.[24] This hand seal is also used in performing the Water Release: Water Shark Bullet Technique. In Kakashi Hiden: Lightning in the Icy Sky, prior to receiving his prosthetic arm, Naruto adapted this seal for one-handed use, creating the seal's cross with his left hand's index and middle fingers.

This is more of an initiation of a technique rather than a hand seal where the user simply claps their hands together as exemplified when Naruto Uzumaki, for example, summons chakra or is breaking genjutsu. The hand seal sequence for powerful summoning kinjutsu like the Summoning: Impure World Reincarnation and the Dead Demon Consuming Seal end with this motion; similarly, Jiraiya prepares to enter Sage Mode (summoning Shima and Fukasaku) by performing this motion and sustaining it, Hashirama uses it to enter Sage Mode as well, Gaara uses it for Quicksand Waterfall Flow at his fight against Kimimaro. It is also used to perform the Chibaku Tensei technique. Once the seal sequence is completed, the user's hands are held in this position until the desired effect is achieved. While entering its third transformation, the Ten-Tails has been observed to make this particular seal.

Used in techniques such as the Summoning Technique and several Earth Release techniques, this is also more of an initiation of a technique than a seal. The user presses their hand to the surface that is affected.

The seals used for Haku's Thousand Flying Water Needles of Death, are quite different than the basic twelve seals, and are also performed with one hand.

Haku's Demonic Mirroring Ice Crystals technique can be done with a special seal, which resembles Tiger with middle fingers crossed over the index fingers. Interestingly, Orochimaru also uses this seal when giving the Cursed Seal of Heaven to an individual.[25]

The basic Ram seal is mirrored. To form the seal, the hands are joined together where the right hand thumb is on top of left hand, and the forefinger and middle fingers are facing vertically. This seal is used by Obito and Madara for Six Paths Ten-Tails Coffin Seal,[26] and also for Sage Art: Yin Release Lightning Dispatch.[27]

This is another one of the seals that are used in normal techniques, yet isn't one of the basic twelve seals. The "Yang Water" (壬, Jin) seal is used in techniques such as the Water Release: Water Dragon Bullet Technique and the Shrine Seal. In the anime, this seal is formed similar to the Dog seal, but the left hand is under the right, and the left's palm is facing up.[28]

The fūinjutsu Five Elements Seal used by Orochimaru uses a single special seal, which consists in both hands' thumbs and little fingers touching each other tips, with left index and middle fingers and right index finger raised, with the latter touching the left middle. The left ring finger is placed over the right ring finger, with both the latter and the right middle folded down (just like the Ox seal in the left hand).[29]

The Akimichi clan use a certain seal in their Multi-Size Technique, which also resembles the Bird seal from frontal view. However, it is confirmed that this is a different seal, as the Bird seal has been seen in a side view in techniques such as Water Release: Water Dragon Bullet Technique and the Shadow Sewing Technique. The index and little fingers are raised up, the middle and ring fingers are each folded on top of the hand opposite itself and interlocked with each another, and the thumbs are pressed together at their end segments.

A hand seal involving both the user and the enemy is used in the kinjutsu Twin Snakes Mutual Death.

Probably another seal used to gather and focus chakra, it was used by Kakashi in his first battle with Deidara, when he activated his Mangekyō Sharingan to use Kamui for the first time seen in the series. It is formed like the Tiger seal, except with the index fingers' end segments pushed down against each other, forming a house-like shape in the user's point of view. When Kakashi used it, he positioned it in front of his left eye.

Sasuke used a seal, similar to the Akimichi seal, in his battle with Deidara, when he used either Hidden Shadow Snake Hands or Binding Snake Glare Spell.

This seal is used in Daytime Tiger. It does not release chakra, but rather keeps it inside the body to use as energy and strength. This creates a missile type of technique which is not a body of chakra. This seal is actually based off one of the original Kuji-In seals, the seal of the Outer Lion. In this case, the hands are meant to resemble a tiger. The index fingers (the "eyes" of the Tiger) glow green with the evaporating green sweat of the user (result of releasing the Gate of Wonder).

Kisame's Water Release: Great Shark Bullet Technique requires this seal. Possibly a comparison to Guy's Daytime Tiger seal, which resembles a tiger, this hand seal is a thrust, but with both hands touching at the wrist and right hand above the left. The fingers are also folded in a way that vaguely resembles shark's teeth. This overall placement of the hands resembles a shark with an open jaw.

When Sumashi uses Earth Release: Tearing Earth Turning Palm, he uses a special seal that is formed by cupping the left hand and turning it so that it faces the ground and placing the right hand next to it with the index and middle fingers raised.

The signature technique of Hoshigakure Mysterious Peacock Method uses a hand seal that has the middle and other index finger pushed down and touching, with the right index finger and pinkie touching together to form an arch.

In the anime, certain variant seals to aid in the activation of the Byakugan are seen. Most are some of the basic twelve seals, but several are different. In the manga, seals are indeed used several times, but of course, they cannot be seen with detail.

In the anime, a special seal is used instead of what is seen in the manga for the Water Release: Water Formation Wall Technique.

In the anime, the Fūma clan used various unknown hand seals for their secret techniques, the Curse Mandala.

In the anime, some jutsu feature a seal similar to the Snake seal, but with the right hand fingers all on top of the left instead of interlocking.[32][33]

In Naruto the Movie: Legend of the Stone of Gelel, Ranke uses an unknown hand seal to activate her Tornado Lightning. However, considering that neither she nor her comrades knew what chakra is, her technique is unlikely to be ninjutsu, and her "hand seal" is likely merely an attack gesture.

Land of the Sky's Seal

In Naruto Shippūden the Movie: Bonds, an unknown seal is used to focus chakra in preparation for attacking from the Flying Destruction Machine. The seal is formed by pressing the knuckles of each hand together, with the back of the hands facing outwards.

In Naruto Shippūden the Movie, the shinobi affiliated with the Land of Demons use unique seals unused by the usual shinobi seen throughout the series.

The first four of these are unseen and it may be that she only shouts these words while holding Shō. Yomi did not use these last six seals.

In Naruto Shippūden the Movie: The Will of Fire, Hiruko uses a special seal for the Storm Release: Thunder Cloud Inner Wave, which resembles Tiger, but only with the middle fingers raised.