Haori (ハオリ, Haori) was a resident of the Land of Ancestors during the reign of Kaguya Ōtsutsuki.

During Kaguya's reign, Haori appeared to Hagoromo and Hamura Ōtsutsuki to request their assistance with a dispute in the village. In the village, the local farmers were fighting over a shortage of water, which Hagoromo offered to solve. Haori told him to be careful. Later, Hagoromo spotted Haori whilst she was on her way to the God Tree as part of a ritual established by Kaguya. Hagoromo attempted to make her stay, but she refused, noting that it was her obligation to serve the God Tree and gave him her necklace before saying her goodbyes and departing. Later on, after ascending the God Tree against his mother's wishes, Hamura found her, using his Byakugan, along with other residents of the Land of Ancestors wrapped in the roots of the tree itself. Their bodies were sacrificed to the God Tree through its sacred ritual.

Haori had long, black hair and large black eyes. She wore a blue dress and a white one. She also wore a necklace.

As Hagoromo was in love with Haori, her death enraged and caused him to awaken his Sharingan. Her death also inspired him to learn senjutsu in order to oppose the cruel laws of his mother. 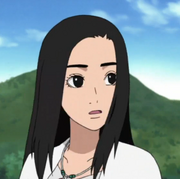