As a genin, he was placed in a team with Ibiki Morino and Tokara. During the Chūnin Exams, Hayate and his team confronted Anko Mitarashi and her team-mates.[2]

As a Tokubetsu Jōnin, Hayate was an extremely skilled shinobi, further emphasised in the anime where he was chosen to be reincarnated by Kabuto Yakushi. Baki, a skilled and experienced shinobi from Sunagakure, commented that the village had many talented ninja after seeing Hayate's skill at such a young age.

Hayate's signature ability was his skill in kenjutsu. He was highly proficient in the Leaf Style, being able to perform the difficult Dance of the Crescent Moon, an advanced technique that attacks the enemy's blind spot while using the Shadow Clone Technique as a distraction, something Hayate could summon without using hand seals. The anime notably extended his abilities; he was seen performing the Dance of the Crescent Moon equipped with nothing more than kunai, still resulting in an huge impact.[4] During his fight against Baki, Hayate proved to have possessed keen reflexes as he was able to draw a kunai in time to block an attack despite being inches away from his opponent and, on several occasions, was fast enough to use his sword to deflect kunai thrown at him while he was in mid-air. Hayate also displayed great physical strength and precision in his sword attacks, slicing through or shattering several boulders with one strike.[5] In addition, he was well versed in sword techniques that required great speed to confuse the enemy such as the Secret Sword: Moonlight.

Notably, Hayate also had excellent tracking and stealth skills, having remained undetected for a considerable period of time while spying on Kabuto. The anime showed that Hayate was an adept at using the Transparent Escape Technique which gave him personal praise from the Third Hokage, who later assigned him as the only suitable candidate to undertake the dangerous mission of spying on Orochimaru's right-hand man.

In the anime, Hayate also showed proficiency with taijutsu, able to hold his own during his confrontation with a weakened Naruto Uzumaki and could kick him away with such force that the wall Naruto smashed against received massive cracks.[4] He also had a keen sense of smell, being able to smell the blood of thousands of people even though he was far away from the battlefields. He showed himself to be very nimble, able to effectively manoeuvre through a barrage of rock projectiles while still moving in for an attack. Hayate also proved to be quick thinking and a cunning strategist as shown in his fight with Baki, where he used Baki's own spit powder as a substitute, confusing Baki, before delivering a kick to the Sunagakure ninja's face. Hayate had a very strong will and mentality; after being reincarnated, he was able to prevent the commands he was given in a few instances, even when his personality was erased, a feat very few that are reincarnated have managed to accomplish.[5][6]

At first sight, Hayate appeared to be not in the best of health, as he had an unexplained chronic cough and eye bags. He, however, is scheduled to be the proctor during the final rounds of the Chūnin Exams, and as such, oversees the preliminary matches that will decide who advances to the final round. During the battle between Neji and Hinata Hyūga after an enraged Neji prepared to attack Hinata with the intent of killing her, Hayate along with the other jōnin present stopped him from doing so.

After the preliminaries were completed, the participants were given a chance to train and recuperate. In the anime, learning of the death's of several Anbu who had been assigned to guard Sasuke Uchiha, Hayate worried about Yūgao who was in that unit, rushing to the village hospital. After a brief conversation with Yūgao in which the two lovers promised on the moon to be there to protect each other no matter what. He was assigned by the Third Hokage to investigate Kabuto Yakushi, who had been revealed as Orochimaru's spy after a confrontation with Kakashi, tracking his target to Kikyō Castle Hayate learned of Sunagakure and Otogakure's plans to invade Konoha after overhearing the conversation between Baki and Kabuto. Before he could escape to tell the Third Hokage what he had learned, he was sensed by the two and chased down. After a short battle with Baki, Hayate used his Dance of the Crescent Moon technique on him. However, the swing of his blade was too shallow and got stuck in his flak jacket. As Baki praised him for his skill and effort, he used his Blade of Wind technique to kill Hayate. His body was found the next day by a squad of Anbu, including Yūgao, who had been sent to investigate the sounds of a disturbance in the area. Genma Shiranui subsequently replaced Hayate as proctor for the Chūnin Exam finals.

In the anime, the fight between Hayate and Baki was expanded upon, revealing Baki actually needing to use his bare hand to stop Hayate's strike. It is shown that Hayate was hit multiple times by wind discs and that Kabuto took away his DNA, removing his corpse's odour in the process. 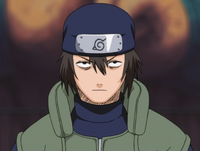