Heiji (ヘイジ, Heiji), also known as Heiji of the Rain Shelter (雨宿りのヘイジ, Amayadori no Heiji), was a shinobi from Amegakure as well as the right-hand man of Kandachi.

Heiji was a subordinate in Hanzō's regime and the right hand of Kandachi who was the right hand of Hanzō. At some point he was killed within the walls of Amegakure. Some time later, he was accidentally reincarnated by Kabuto Yakushi who was looking for Hanzō instead.

Heiji seemed to be a relatively quiet man. He was annoyed that he was being controlled.

Heiji had purple eyes. He had a dark hat on his head and his lower face was mostly obscured by a helmet-like respirator, nearly identical to Hanzō's. The upper portion of this mask bore the symbol of his village and was mirrored by four indentations on the part covering his mouth. He wore the costume consisted of a diving equipment — as typical loose of his village, accentuated by bandages wrapped around their wrists over the blouse and lower legs, a flak jacket with swirls in the chest-plate and standard shinobi sandals.

Heiji was capable of using a tag with a technique formula on it to create a smokescreen. It was effective in allowing other reincarnated shinobi to escape the battlefield, but he was not capable of escaping himself.

During the Fourth Shinobi World War, Kabuto deployed Heiji, who he saw as one of his weaker assets, in an attempt to unseal his other, stronger pawns. During a scuffle between Kabuto's weaker pawns and the Allied Shinobi Forces, Heiji created a smokescreen diversion so some of the reincarnated shinobi could escape. Afterwards, he was cornered by the Fourth Division and sealed.

Later, when the Impure World Reincarnation Technique was cancelled, his soul was returned to the afterlife. 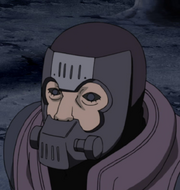