Hikaku Uchiha (うちはヒカク, Uchiha Hikaku) was a member of the Uchiha clan before the founding of Konohagakure.

He had shoulder-length brown hair that framed his face and the rest of which he tied into a high ponytail. He wore a high-collared purple shirt that had a chain of sorts draped around the right shoulder.

Despite his young age, he was one of the clan's most powerful shinobi and was also endowed with great leadership skills.[1] He possessed the clan's kekkei genkai, the Sharingan. 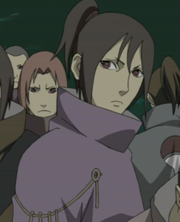