Hina (ヒナ, Hina) is a ninneko that lives with Nekobaa at an Uchiha supply base.

Hina has a very calm and almost pleasant disposition most of the time, even after being called talking tanuki by Suigetsu Hōzuki, she seemed unperturbed, unlike her partner Denka, who was seemingly outraged.

Hina is predominantly a light-coloured brown with darker markings on her cheeks. Suigetsu, when he first met them, mistook the two for talking tanuki.[1] She wears a simple red kimono with mesh armour underneath, held closed by a simple white sash.

While nothing has been seen of their abilities, Sasuke Uchiha did note that Suigetsu would end up a scratching post if he messed with her and Denka.[2]

When Sasuke and Hebi made their way to the old Uchiha supply base, Hina and Denka greeted them at the entrance and were glad to see Sasuke. However, when Suigetsu began treating them like common cats, Denka, who was seemingly outraged at this, hissed at him, while Hina merely asked Sasuke whether or not he had brought them any treats. When Sasuke later warned Suigetsu about the two and then made the reason for his visit clear, she and Denka led them to where Nekobaa and Tamaki were so they could get supplies. 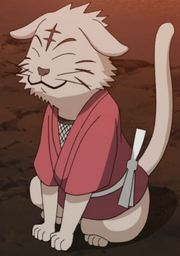