"From the Bottom of My Heart"

Bug watches Amado at Code's mercy. Amado wants to talk to Ada about Kawaki, which stays Code. Amado explains that Kawaki is his ace in case Konoha abandons or tries to eliminate him. She asks for elaboration, but Code thinks he's bluffing and stalling for time. Ada tells Code not to interrupt, and he thinks Amado is trying to manipulate her. Code says that with Kawaki being off limits, she can't deny him Amado as well. Ada signals Daemon to act, and he holds Code in place. Code's killing intent is reflected on him as a couple cuts. He evades Daemon with a Claw Mark. Ada asks if Code attacked Daemon with intent to kill, and he says she can't complain when she fired the first shot. She reminds him she said she'd dispose of him if he ended up being a hindrance, which confuses him. Amado points out that she has an invitation from Konoha as a way of getting close to Kawaki, which is hindered by her association with Code. Code accuses him of tricking Ada and attacks him, but Daemon gets in between them, reflecting his attack. Daemon says that if he can't understand when Ada tells him to stop, he needs to be disposed of. In Konoha, Shikamaru explains Ada's enchanting to Naruto, Sasuke, Boruto, and Kawaki. Sasuke wonders if she's a cyborg relic like Code, and Shikamaru recalls Amado explaining that several cyborgs stronger than Jigen had been scrapped. Ada seems to be one of these based on Amado's reaction, and not the only one, mentioning that Code used someone who wasn't Ada to counter Kawaki during their fight the previous night. Code asks Ada to rein Daemon in. She says she's grateful for releasing her, which is why she helped restore his power, but it's time to call it a day. Code tells her he loves her, and asks if she doesn't need his power. She doesn't care for his attitude, and real or not, she has had enough of his feelings. Daemon teases Code, saying that Ōtsutsuki or anyone else, he'll protect his sister. Code realises Ada only needs one knight, him. He intends to best Daemon, who dares him to try. Bug reveals to Code that Daemon's reflection ability only works when he's touching someone else with his hands, hoping that with the knowledge and his restored powers, Code and Daemon take each other out. Daemon has the upper hand as they fight, mocking Code's earlier claim of feeling he couldn't lose. He admits Code seems stronger than Jigen, so neither Naruto or Sasuke should trouble him, but Daemon considers himself stronger than any of them. Code prepares to flee, and Ada is ok with it as long as he doesn't get in her way, promising to have him killed if warranted. Code states his goal, the will he inherited from Isshiki, and says that once he's an Ōtsutsuki and her ability doesn't work on him, he'll truly know if he loves her or wants her dead. He escapes, taking Bug with him. Ada mockingly commends Amado for getting out of a difficult situation and separating her and Code, though he points out she also wanted a reason to cut Code off. She claims she just wants to hear the rest of his story, ready to kill him if he's bluffing. He reiterates Kawaki is his ace as Daemon jumps to ride him. He continues, explaining that Kawaki has regained his Kāma and now has access to Isshiki's abilities, his power likely to keep growing. As such, no one in Konoha can oppose him, except for Amado. She realises Amado has given Kawaki something other than Kāma. He reveals he's given Kawaki an emergency shutdown command only he can see. Because Kawaki concerns not only Konoha, but other villages as well, they have no choice but to rely on Amado. Ada accuses him of solving problems he created, and asks why he didn't implant such a command before. He explains that Jigen forbade him from doing that to his precious vessel. Daemon is confident he can beat Kawaki, and she wonders if Amado died, Konoha could rely on them. Amado finds her point interesting, but adds it's insurance for his standing, his goal being different, and requiring Kawaki's Kāma. She tells him he still hasn't answered her question, and he says it'll take a long time, asking if she can wait until they're in Konoha. He elaborates that she should accept Shikamaru's offer to build a relationship with Kawaki. She and Daemon are puzzled by the idea, and Amado assures them he'll mediate. Elsewhere, Bug complains about Code taking him, though Code saw it as rescuing him instead of leaving him to die. Code blames Kawaki for everything, for taking everything he cares about. He vows to kill Kawaki and wreck everything he holds dear, including the Hokage, his friends, and Konoha. 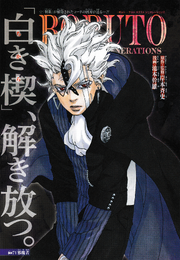