Hokage vs. Hokage!! (火影vs火影!!, Hokage Bāsasu Hokage!!) is volume 14 of the Naruto manga.

To share the thrill of getting to fight one's former masters, Orochimaru summons the First Hokage and the Second Hokage for Sarutobi's benefit. Meanwhile, Sakura informs Naruto and Shikamaru of the mission given to them by Kakashi. Pakkun alerts them to the fact that they are being followed by nine Otogakure ninja. Naruto suggests ambushing them, but Shikamaru states that this would waste too much time and that it would make no difference since they are all under-qualified to neutralise the ninja. Shikamaru volunteers to stay behind and buy time for Naruto and Sakura to catch up to Sasuke. The Oto ninja pick up on his trail, but it does not stop them from getting trapped by his shadow technique.

Shikamaru quickly realises that he does not have enough chakra to immobilise eight Otogakure ninja. What's more, he realises that he has missed one of the group, and hypothesises that the ninth had been keeping his distance from the others in case of an ambush. He attacks the eight to confirm his suspicions, and the ninth protects them. Although he now knows the ninth's location, Shikamaru lacks the energy to capture him too. Accepting that he will die, Shikamaru waits until he can no longer contain the eight ninja. Once they are free, however, Asuma appears with the ninth in tow and kills the remaining eight, thanking Shikamaru for lasting so long. Meanwhile, Orochimaru robs the First Hokage and the Second Hokage of their free will so that their memories will not get in the way of fighting Sarutobi.

Sarutobi attacks with a fire technique, which the Second Hokage neutralises with a water technique. The First Hokage follows with one of his signature Wood Release techniques, immobilising Sarutobi. Sarutobi summons Enma and has him transform into a staff to release him. Sarutobi attacks Orochimaru with Enma, and Orochimaru parries with his Kusanagi. In the midst of his attacks Sarutobi plants explosive tags on the First and Second. Although it removes their legs, the damage regenerates, a side-effect of the technique used to reincarnate them. Seeing that a normal fight will accomplish nothing and that he is already tiring, Sarutobi prepares for his death.

Just as Hiruzen is about to perform his last technique, Orochimaru removes his face, revealing that of a young woman underneath. Realising that Orochimaru has learned how to switch to others' bodies as a form of immortality, Sarutobi thinks back on how Orochimaru came to be expelled from Konoha; how he had caught Orochimaru experimenting on his fellow Konoha ninja in order to achieve immortality. With Orochimaru finally having proven successful, and already knowing of his interest in Sasuke, the Hokage states that Orochimaru's true intentions for this Konoha Crush are to gain the Sharingan.

Orochimaru restores his original face so that Hiruzen can continue to fight his former protege. The First Hokage and the Second Hokage attack again, and Sarutobi once more reflects on the last time he saw Orochimaru. After being caught committing an unforgivable crime, Orochimaru gave Hiruzen the chance to kill him but he hesitated and Orochimaru fled, allowing him to at long last carry out his dream of achieving "greatness". Hoping to repent for this mistake, Hiruzen creates two shadow clones and then performs the Dead Demon Consuming Seal.

The First Hokage and the Second Hokage attack Sarutobi's shadow clones, but the clones still manage to catch each of the former Hokage. The Dead Demon Consuming Seal grabs the Hokage's souls, breaking all of the jutsu in play and allowing them a brief return to their senses. Sarutobi apologises to both for what he is about to do and then seals away their souls with the move also revealing the dead bodies of Kin Tsuchi and Zaku Abumi, both of whom were used as sacrifices to summon the two Hokage. Angry that Orochimaru could make such casual use of others' lives, the real Sarutobi tries to do the same to him. Sensing what is happening, Orochimaru summons his Kusanagi back to him, which Enma tries to stop.

Despite Enma's efforts, Sarutobi is stabbed in the back by Orochimaru's Kusanagi. Orochimaru assures him that he will now die, but Sarutobi is unconcerned, his death guaranteed because of the Dead Demon Consuming Seal. Sarutobi explains the nature of the seal, how it defeated the Nine-Tailed Demon Fox, and then struggles to find the strength to complete the sealing of Orochimaru's soul. Meanwhile, Jiraiya finally takes part in Konoha's defence, stopping the snakes rampaging through the village. Elsewhere, Sasuke catches up to the Three Sand Siblings. Kankurō volunteers to fight Sasuke to give Gaara a chance to escape, but Shino appears and volunteers to fight Kankurō to give Sasuke a chance to catch up to Gaara again.

Sasuke reluctantly agrees to let Shino deal with Kankurō. Shino prepares his kikaichū while Kankurō prepares his Karasu. Gaara, sensing that Sasuke is near, sends Temari away so that they can face each other, the monster within him craving Sasuke's blood. Having dreamt of fulfilling this lust for the past month, Gaara begins the transformation that he initiated during the Chūnin Exams.

Kankurō attacks Shino with Karasu, but Shino avoids the attack thanks to his kikaichū. Karasu follows up with a poisonous gas attack. Shino just barely evades it, but in doing so walks into another attack. Meanwhile, Sarutobi continues to struggle to remove Orochimaru's soul. At the same time his likeness on the Hokage Rock cracks, worrying the ninja who see it. Shino is able to swarm Karasu with kikaichū but Kankurō still manages to get off another attack. The attack falls short, Shino having finally managed to guide his kikaichū to Kankurō's location. The kikaichū consume Kankurō's chakra and Shino passes out from the gas he earlier inhaled, trusting the rest of the battle to Sasuke. 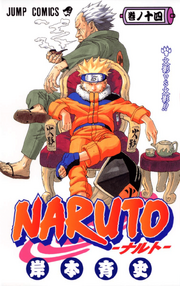