Hoshigakure (星隠れの里, Hoshigakure no Sato, literally meaning: Village Hidden Among Stars) was introduced during the Star Guard Mission. It is founded by the First Hoshikage two hundred years before the start of the series and is located in the Land of Bears. It is also one of the lesser-known shinobi villages in the Naruto universe.

Hoshigakure was formed sometime after a strange meteorite, which the inhabitants called the "star", struck its location two hundred years earlier.

Information gathered from the villagers suggests that the village was founded much sooner than Konoha. Its leader is the Hoshikage (星影, literally meaning: Star Shadow), although the leader is a Kage in name only. The other villages do not recognise Hoshigakure as an equal, nor is there any ninja truly worthy of the title.

The meteorite itself was not that large, but it emitted a chakra-enhancing radiation. The First Hoshikage was able to devise a training method to allow the ninja in the village to harness the power of the star, thus allowing the ninja to gain supernatural chakra levels. The technique used to harness this power is the Mysterious Peacock Method. Upon the development of the skill, the meteorite was then set on top of an eagle's claw pedestal located inside of and at the very centre of the Hoshi ninja training dōjō, which was constructed for the very purpose of training future Hoshigakure shinobi. When this technique is fully mastered, it gives the user almost unrivalled chakra control, to the point where they can solidify it as a shield or create wings for flight.

The training was eventually forbidden by the Third Hoshikage, after he realised the deadly toll the training took on those doing it; the star's intense radiation of chakra was too much for some shinobi to handle, and thus their insides began to corrupt and their organs to weaken, eventually leading to internal bleeding or organ failure. Even if a ninja survived the training, the side effects would eventually kill them. Only Natsuhi and Hotarubi, the parents of Sumaru, managed to survive the training, and both died eventually. Regardless of the terrible side effects, ninja from the Hoshigakure were known for their proud and persistent nature. The Third was assassinated by Akahoshi, who became the substitute Hoshikage and reinstated the training. Despite knowing what the star did, he decided to ignore the effects in the hope of forcing the other villages to accept Hoshigakure.

Being allied with Hoshigakure, Team Guy was sent to Hoshigakure as bodyguards for a mission in episodes 178 to 183, with Naruto joining them later after bribing Tsunade with chestnut cake. There they met Sumaru, who hoped to become a worthy Hoshikage. Naruto empathised with Sumaru, since their goals, and general situations, were the same. Team Guy and Naruto eventually learned of the secret of the star, and two children who had undergone star training revealed the truth to the other Star ninja, who then denounced Akahoshi as unscrupulous and mad with power, and rejected the practice of star training. The star was destroyed by Naruto after Akahoshi implanted it into his own chest.

After the battle the village Genin were sent to Konohagakure for medical aid and recovery, and the village was mentioned planning Akahoshi and his subordinates severe punishment.

The crater was created two hundred years before the founding of the village by the falling meteorite which made a massive crater. In the centre of the crater, a building was constructed to serve as a training ground. It included a pavilion which served as primary training ground and also housed the star. The training ground also included a sleeping hall for the practising genin. The training ground was later destroyed when Akahoshi tried to kill Sumaru and Natsuhi who were inside. The area surrounding the training ground have a number of charred trees and is otherwise barren, since no trees or plants could grow around the vicinity after the meteorite landed.

A small three-storied mansion inside Hoshigakure, where the Hoshikage lives, recieves visitors and hands out assignsments and missions. On the front there is a sign which bears the kanji for "Star".

The grave that, presumably, was made by Natsuhi for her dead husband. It was located within a large, roughly shuriken-shaped rock, with a large boulder on top, usually concealing the entrance. Natsuhi later hid the star within her husband's coffin, hoping that he would protect it, and thus their son.

The underground hideout of Natsuhi and Hotarubi was situated outside the village, within the nearby forests. After Hotarubi's death, Natsuhi lived there alone for years. 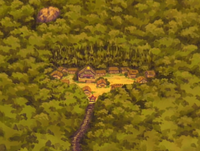