"The Conclusion to a Fierce Battle!"

"How You Use It" (使い方, Tsukaikata) is chapter 21 of the Boruto manga.

The group discusses how to deal with Ao. Konohamaru wants to pressure Ao into using his jutsu absorbing arm with ninjutsu, in order to create a blindspot from which to attack him. Katasuke points out the short moment required for the absorption sphere to form on the arm, which Konohamaru wants Boruto to use to absorb Ao's own jutsu bullets while going in for the final blow. Boruto wants to use the chakra katana provided by Katasuke, but collapses from its chakra consumption. Boruto will have to activate the katana in the last possible moment. Katasuke makes adjustments to Boruto's jutsu absorbing arm. Their strategy is decided. While on the move, Ao is approached by Koji Kashin, who questions Ao's commitment due to the others' escape.

Ao assures him that much like the scientific ninja tools keeping him alive, he is Kara's tool. Koji Kashin is pleased to hear it, and warns Ao of the Konoha shinobi's intent to defeat him, including having developed a strategy. He is more concerned with the possibility of them acquiring the vessel, and stresses that to be his mission. Approaching the ruins where the Konoha-nin regrouped, Ao attacks a hidden Mitsuki with his scientific ninja tools. Mitsuki attacks Ao with Lightning Release, Konohamaru and Sarada with Fire Release. Ao notes them to be unconcerned with chakra consumption as he absorbs their attacks, and concludes they're the distraction for an attack by Boruto. Boruto strikes with the chakra katana from above, but Ao blocks it with his own chakra blade, knocking Boruto back, claiming Boruto's chakra katana, and using it to stab him. Ao tells Boruto he saw through his attack, but Boruto denies it, gripping Ao's hand so he can't let go of the chakra katana. Mitsuki extends his arm and further wraps around Ao's hand. The Boruto Ao stabbed vanishes, being a shadow clone, and Ao feels his strength drained by the chakra katana. Ao uses the tools in his other arm to force Mitsuki into releasing his grip. The real Boruto moves in to strike, using his own jutsu absorbing arm to counter Ao's, leaving him free to land a Rasengan. Boruto uses Ao's own words about how tools are used against him.

Retrieved from "https://naruto.fandom.com/wiki/How_You_Use_It?oldid=1312242"
Community content is available under CC-BY-SA unless otherwise noted.
... more about "How You Use It"
RDF feed
Arc
Ao Arc +
Chapter number
21 +
English name
How You Use It +
Japanese release
March 12, 2018 +
Kanji name
使い方 +
Manga
Boruto +
Names
How You Use It +, 使い方 +  and Tsukaikata +
Picture 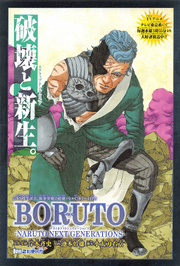