The Naruto Secret: Scroll of Soldiers Official Fanbook (NARUTO -ナルト-秘伝・兵の書 オフィシャルファンBOOK, NARUTO Hiden: Hyō no Sho Ofisharu FanBOOK) is the second of the supplementary guidebooks on the Naruto series authored by Masashi Kishimoto. It is the first of two fanbooks.

The contents of this book consist of detailed background information on the world of Naruto and Konohagakure in specific, including information on the countries and villages, the shinobi organisational system and ranks, the Academy's history, organisation, and curriculum, clans, summons, Konohagakure's enemies, the missions shown in the manga, the main characters, and the Sannin. It also features fan drawings, games, an interview with Masashi Kishimoto, a coloured map of Konohagakure, and the pilot of the Naruto series. 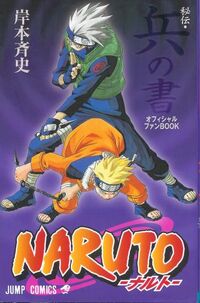