Iō lived in Bamboo Village with his wife and daughter. Despite the village's remoteness, they were able to make a meagre living by selling goods made out of the native bamboo in the nearby towns. For a period of time, they even enjoyed the generous donations of the Lightning Group, who they accordingly celebrated as heroes. But the Lightning Group's deeds eventually brought them into conflict with Kirigakure, and the few who survived sought refuge in Bamboo Village. Iō refused to help them, fearing reprisal from Kiri.

Iō's daughter eventually married and moved to a nearby village. A few months into his daughter's pregnancy, her village was attacked by the Dark Thunder Group - led by a former member of the Lightning Group - and all living there were killed. Iō's wife died of grief upon learning of their daughter's fate. Having lost his family, Iō swore vengeance against the Dark Thunder Group and all its members.

Iō was a very loving father who would go to great lengths for his daughter. He appeared to only care for his village as seen when he would take money from strangers but later refuse to help them because it could cause him and his village harm.

Main articles: Sasuke Shinden (novel) and Sasuke Shinden (anime) When Chino and Nowaki travel through Bamboo Village, Iō hires them to deal with the Dark Thunder Group. When Sasuke Uchiha travels through Bamboo Village shortly afterwards, Iō assumes he's part of the Dark Thunder Group and has Chino and Nowaki join him in attacking Sasuke. Chino and Nowaki realise he is mistaken; Iō does not, and it is only when Sasuke disarms him that Iō relents. Although he refuses to apologise, he does ask for Sasuke to help them.

While Sasuke is away inspecting locations the Dark Thunder Group attacked, an attack is launched against Bamboo Village. Though some of the villagers are able to escape, Iō is among those captured. By the time Sasuke returns to help, Iō and the Dark Thunder Group's leader, Karyū, are trading insults, indicating that they know each other. Once he defeats Karyū, Sasuke questions Karyū about his despite Iō's demand that Sasuke execute him. After hearing Karyū's story, Sasuke decides to turn him and the Dark Thunder Group over to Konoha. Iō is angered that Karyū will be allowed to live after killing his daughter, and so enters the shed where Karyū and his men are being held. He locks the door from the inside, douses them with gasoline, and lights them on fire; Iō perishes alongside them.

In the anime, Iō defends Bamboo Village by himself against a mob of exploding humans. When Sasuke arrives to help, Iō takes the opportunity to check on his daughter, who had been evacuated to a shelter. On arrival, he discovers that she has also become an exploding human; they are unable to stop her from detonating. Iō blames Fūshin for what has happened before running into the explosion's flames, dying in the process. 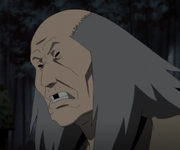