Idate Morino (森乃イダテ, Morino Idate) is a genin from Konohagakure who later fled his village, becoming a citizen of the Land of Tea and eventually adopted into the Wasabi family.

Idate took the Chūnin Exams, up until the "tenth question". Like any exam ran by his older brother Ibiki, those who chose to abandon the exam before the question would have their team disqualified, but can retake it in six months. Idate chose to stay along with his squad. He was part of the remaining participants who would ultimately fail the exam, being accused of sacrificing a squad's future for their own. This failure resulted in the participants stuck as genin for life, never allowed to retake the exam, which left him depressed. When he protested, Ibiki suggested that he was not cut out for being a ninja. Aoi Rokushō told Idate that he could become a chūnin by stealing a secret scroll and the Sword of the Thunder God. After Idate brought the items to Aoi, he asked about becoming a chūnin. Aoi informed Idate that he would be made a chūnin and Aoi made a jōnin in Amegakure, using the sword and scroll as gifts. Therefore, Idate was classified as a fugitive by his home village, and had to go on the run in order to avoid being imprisoned for his theft.

It was not long before Ibiki uncovered Aoi's plan and chased after his little brother. However, Aoi quickly brought in Amegakure allies to capture Ibiki and eliminate the two Anbu members with him. Aoi then tortured Ibiki to read the scroll, in the process accidentally setting the building on fire after Ibiki managed to free both himself and his little brother. However, despite Ibiki's fierce efforts, the flames soon separated the two siblings, and Idate was forced to flee the fire that would (supposedly) kill the two older nin, although they both escaped separately.

At some point after that, Idate tried to steal money from Jirōchō Wasabi and failed, although Jirōchō took pity on him, and let Idate join the Wasabi family after lecturing him, and giving Idate a pocket-knife.

During his days as a shinobi, Idate was rather arrogant and boastful, proclaiming to his older brother that he would become a jōnin in record time. Because of his rather arrogant attitude, Idate wasn't capable of successfully passing the "tenth question" of the Chūnin Exams and placed his own success and abilities ahead of his team's.

After being tricked by Aoi Rokushō of stealing the Sword of the Thunder God and a secret scroll, being forced to watch his brother's supposed death, and fleeing Konohagakure in fears of receiving punishment for his crime, Idate became distrustful of shinobi in general due to Aoi's betrayal, and proved himself slightly as a coward for first panicking at the threat of being killed, and subsequently refusing to face justice for his actions and chose the easy way out by escaping his birth village.

After being adopted into the Wasabi Family, Idate gained an unwavering and undying admiration of Jirōchō Wasabi, whom took him in as a pupil after the latter gave him food even after Idate attempted to rob him out of starvation, and became incredibly hostile whenever someone disrespected Jirōchō and dearly guarded the pocket knife that Jirōchō gave him, deeming it more important than his own life. After encountering Team 7 and reconciling with his brother, Idate became more cheerful and friendly towards others, and despite remaining away from Konoha and from his brother, still viewed both the village and Ibiki as his family.

Despite no longer considering himself a ninja, Idate has been shown to still be proficient in basic ninja abilities. He quickly noticed when he was caught in a genjutsu and easily broke through it.

In preparation for an important race, Idate underwent harsh cardio training, using very heavy weights in a similar way to Rock Lee to increase his speed expeditiously. This method proved successful as he was able to easily outpace Team 7, including Sasuke Uchiha who recently underwent extreme speed training himself.

Three years after leaving Konohagakure, Idate was hired to be the Wasabi family's runner for the Todoroki Shrine Race in the Land of Tea, with Naruto Uzumaki, Sasuke Uchiha, and Sakura Haruno employed as his bodyguards. They first met at a tea house where Idate started flirting with Sakura, much to Naruto's dismay. Then Idate told the waitress that Team 7 would pay the bill. He then ran off wearing ankle weights, but tripped on a branch, allowing Team 7 to catch up, but Idate took off his ankle weights and ran off again. This time they couldn't catch up. They later surprisingly met him at Boss Jirōchō's house. Aoi and Team Oboro turned out to be the bodyguards of the opposing Wagarashi family's runner, Fukusuke Hikyakuya.

Their leader, Kyūroku Wagarashi, hired them to take care of Idate for him. And, although Team 7 was constantly angered by Idate, they still protected him at any cost, especially after hearing his tragic story and realising that Ibiki was his older brother. After enduring a difficult battle with Aoi, Team 7 helped him win passing Fukusuke for the first and only time, and crossing the finish line. When Ibiki came to pick up an injured Sasuke, Idate bowed to him, while Ibiki said that he didn't have the eyes of a coward anymore. 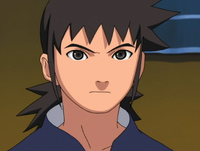