Someone Precious to You

"Important People…!!" (大切な人…!!, Taisetsuna Hito…!!, Viz: Someone Precious to You) is chapter 29 of the original Naruto manga.

Seeing Haku's face for the first time and recognising him as the boy he met a few days earlier, Naruto stops himself from killing Haku. Assuming that he is being shown mercy, Haku reminds Naruto that he killed Sasuke. He goes on to add that sparing his life is rude since his life no longer has meaning because he has lost to Naruto and, in turn, lost his usefulness to Zabuza. Because Zabuza is the only person to have enter found value in Haku's existence, Haku swore to live his life as Zabuza's tool. Meanwhile, Kakashi takes advantage of the damages he has received so far. Knowing that Zabuza is covered in his blood, Kakashi summons a pack of ninken to follow his own scent and restrain Zabuza. 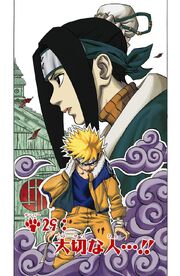