Sasuke and Hebi head for the meeting place where Itachi is waiting. On a Sunday in Amegakure, Pain instructs Konan to look for the intruder in West Three — the third part of the town's western area — while he prepares to deal with whomever it is. Jiraiya — the intruder — overhears two Amegakure ninja discussing Pain. He proceeds to capture them so that he can interrogate them. 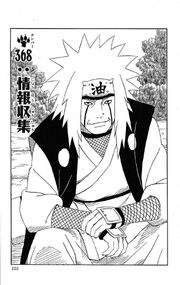