Chiyo realises that Sasori was responsible for the Third Kazekage's disappearance years earlier, adding the deaths of three Kazekage to his resumé. Having since turned the Third into a puppet, Sasori attacks Chiyo and Sakura with it. Although Chiyo controls Sakura like a puppet to help her avoid the Third's poisonous strikes, they are overwhelmed by the puppet's attacks. Chiyo opts to bring out the Mother and Father, the first puppets Sasori created, to block the Third. 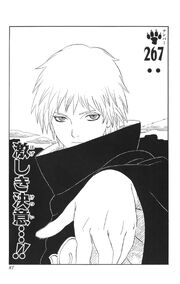