After Team 7 returns from a mission, Kakashi is summoned away. Naruto tries to spend time with Sakura and Sakura tries to spend time with Sasuke, but both are unsuccessful. Although disappointed, Naruto notices that he is being followed. He forces Konohamaru to reveal himself, and Konohamaru congratulates Naruto's detection skills, unaware that he was doing a terrible job of staying hidden. Seeing Sakura, who is moping from being turned down by Sasuke, Konohamaru assumes that she is Naruto's girlfriend. She tries to attack him for this mistake and, while fleeing, Konohamaru runs into two foreigners. Elsewhere, the Third Hokage informs Kakashi and Konoha's other jōnin that the Chūnin Exams are about to begin. 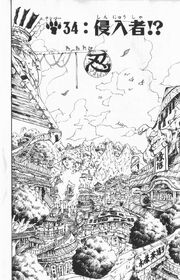