Supplementary
Iron Armour Seal is the fūinjutsu used by Kumogakure to seal Gyūki into its respective hosts.

The seal itself takes the form of the kanji for "iron" (鉄, tetsu) and is usually printed somewhere on the jinchūriki's body: Killer B's right shoulder, and Blue B's chest.[1] Not much else is known about the seal, besides the fact that it was stated by B to be of lower-quality and weaker than the Four Symbols Seal, which was used to seal Kurama inside of Naruto Uzumaki.[2] 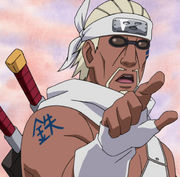