Kawaki is startled by Kurama's appearance. Kurama introduces itself, and explains it's the one responsible for watching over Kawaki while Naruto sleeps, something the other Kage have requested as well, commenting on the how times have changed to the point such a thing is possible. Kawaki is vaguely familiar with the concept of Tailed Beasts from Kara's documents, but mistakenly believes that Kurama is affiliated to Naruto because of his strength, and allowing him to lead Konohagakure. Kurama corrects Kawaki, explaining Naruto is like Kawaki himself. It explains it used to be feared and took many lives, including Naruto's parents', and that Naruto was made into a vessel to seal it, causing him to be shunned by others. Kawaki thinks back to Naruto's words about using shadow clones. Kurama continues, adding that Naruto was very bad at jutsu, but that wasn't what filled his heart. Kawaki thinks back to Naruto saying having friends will change his life.

Kawaki asks Kurama if he can become someone like Naruto. Kurama is affirmative, but stresses it's up to him, and notices Kawaki's tears. Kurama tells Kawaki it's late and that he can look for the missing vase fragment the next day. Kawaki leaves as the vase continues to leak.

During the day, Kawaki picks up walking up trees easily, and asks to learn the shadow clone already. Naruto recalls having had lots of trouble learning it, but Boruto points he also picked up walking up vertical surfaces easily. Chōchō and Sarada watch from afar, Chōchō still crushing on him, and Sarada, while understanding of Kawaki's situation, is jealous of his special attention from Naruto. Chōchō argues Naruto treats everyone like family. Sai and Shikamaru also watch them, Shikamaru find the children to be too innocent. Sai asks if he still doesn't trust Kawaki, and Shikamaru asks him, as head of Anbu, to give him one. He reaches for his cigarettes, but Sai lifted them off, as smoking in public places is forbidden. Sai concedes Naruto is naïve as well, but they don't have enough information to conclude Kawaki intends to betray them. Shikamaru asks about the intel Konohamaru recovered, and Sai reveals them found coordinates to a place that can only be reached with space–time ninjutsu. Sai is suspicious of how plain it was, considering it a possible trap, but being unable to ignore it, they passed it on for Sasuke to investigate.

Sasuke arrives at the location with his space–time ninjutsu. He examines carvings on the walls, one of which causes a hologram of Kinshiki to appear. An adjacent carving changes it to Momoshiki. A third carving changes it to Kaguya. Noticing all of them to be Ōtsutsuki who came to their world, and the carvings to be arranged in pairs, some quite significantly damaged, he speculates Kaguya also came with a partner. He observes the hologram activated from the carving paired with Kaguya's. He hears some ruckus coming from under the hologram's platform, and is shocked to find a Ten-Tails-like tailed beast.

Naruto asks Boruto about his Kāma, but it hasn't hurt again, only throbbed after training. Sarada teases him on becoming more sensitive, and Mitsuki dismisses it, flustering her. Boruto asks Kawaki, who shares similar experiences, adding he hasn't woken up from nightmares anymore either. Sarada wonders if there's any connection to the mark on her mother's head, aware it's some jutsu. Naruto explains a bit on the Strength of a Hundred Seal, telling them to look at the Hokage Rock, pointing out the Fifth Hokage also had it. Kawaki isn't optimistic, as the shape is very common, but Mitsuki has been told by his parent that there is a lot of poorly understood story about the jutsu. Sarada says she'll ask her mother about it. Boruto asks Kawaki if he's up to go ask the Fifth about it, but he has things to do at home. Before Boruto leaves with Mitsuki, Kawaki warns him that Jigen knows everything and that looking into Kāma will eventually lead them to him. Boruto agrees they'll have to get stronger, and assures Kawaki his issues aren't just his own anymore, calling him brother. He says they'll crush Jigen and Kara together. Kawaki smiles at that and agrees.

Sasuke observes the tailed beast resembles the Ten-Tails, noticing its eye, and its tails pinned down by stakes, unable to tell how many there are. Before he can do anything else, he notices someone arriving through space–time ninjutsu and hides. From the intel he has from Anbu and the Kāma on his chin, Sasuke recognises Jigen. Jigen talks at the beast nonchalantly as he hovers above it, calling it Ten-Tails. It tries to eat him, but he's out of reach. Jigen says it's too soon, and that he has to complete the vessel. He uses his Kāma to absorb more of its chakra, and as the Kāma pattern spreads, which Sasuke likens to Boruto and Kawaki, Jigen's form briefly changes into the Ōtsutsuki supposedly partnered with Kaguya. Sasuke is concerned by all of it, and feels the need to inform Naruto at once. Jigen intends to visit Boruto and Kawaki.

Mitsuki raises the possibility that Boruto will never be rid of his Kāma, regardless of defeating Jigen or not. Boruto wants to deal with the situation as if it was a mission, to change his disposition towards it. If it's a mission, he'll put his best effort on it as Sasuke's disciple, the Hokage's son, and a ninja. 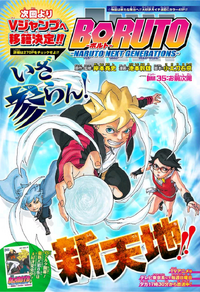