"The Too Distant Elder Brother"

"Sasuke and his Father"

Itachi was confronted by members of the Konoha Military Police Force about his recent actions, having not lived up to the Uchiha clan's expectations since he joined the Anbu. They questioned him about the death of Shisui Uchiha, Itachi's close friend, who had been instructed to keep tabs on Itachi's movements. Although Shisui's death appeared to be a suicide, the police believed Itachi may have staged the scene. Itachi attacked them and easily overpowered them, expressing his distaste for the clan. Fugaku stepped in and demanded Itachi's apology, but Itachi persisted, saying he had lost faith in the clan's future. It was only after Sasuke's pleaded for him to stop that he apologised. 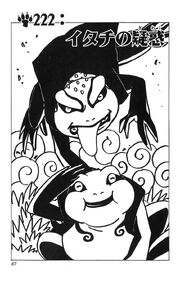