Itachi and Sasuke, Brothers (兄と弟, Itachi to Sasuke) is volume 25 of the Naruto manga.

Sasuke tries to ignore Naruto and continue on to Orochimaru. Remembering Sakura's earlier failure to persuade Sasuke, Naruto asks why he would turn away from everything and everyone in Konoha. Sasuke responds that he owes them nothing and has finished his business with the village. When Naruto attacks him in anger, Sasuke adds that he didn't become any stronger by staying in Konoha. Orochimaru can give him the power he desires. Naruto reminds him of Orochimaru's actions and his intents to take Sasuke's body. Sasuke does not care, so Naruto promises to bring Sasuke home by force if necessary.

"Future and Past" (未来と過去, Mirai to Kako)

Sasuke remembers that he and Naruto were interrupted the last time they fought. Intending to settle that contest, Sasuke attacks him. He is impressed by the power granted to him by his newly-evolved cursed seal and concludes he has made the right choice by defecting to Orochimaru. Naruto counterattacks in an effort to bring Sasuke back to his senses. Sasuke claims to have always been quite aware of what he was doing, even when he was wasting his time in Konoha. He is not driven by future possibilities, his actions determined by his past with Itachi.

One day when they were younger, Sasuke accompanied Itachi on one of his training sessions. Impressed by Itachi's skills, Sasuke asked Itachi to teach him something, but Itachi, as always, refused by poking him on the forehead and promising to help him later. As they returned home, Sasuke marvelled at the Uchiha clan's accomplishments as explained to him by Itachi. When they encountered their father, Fugaku, he spoke to Itachi about an approaching mission. Itachi refused to take part, wishing to take part in Sasuke's Academy orientation. Seeing that Itachi was determined, Fugaku volunteered to go in his place.

Sasuke was glad to have Fugaku come with him during his first day at the Academy. However, his father's, his instructors', and even his classmates' expectations for him to live up to Itachi's milestones only disappointed him. Sasuke did his best, earning praise from his father for a start on the road to matching Itachi. Itachi, meanwhile, began to display strain from what was expected of him as the future of the Uchiha clan, at one point theorising that Sasuke hated him. Sasuke tried to explain that this wasn't the case, but Itachi insisted that that was his purpose as an older brother: to be an obstacle for Sasuke.

Itachi was confronted by members of the Konoha Military Police Force about his recent actions, having not lived up to the Uchiha clan's expectations since he joined the Anbu. They questioned him about the death of Shisui Uchiha, Itachi's close friend, who had been instructed to keep tabs on Itachi's movements. Although Shisui's death appeared to be a suicide, the police believed Itachi may have staged the scene. Itachi attacked them and easily overpowered them, expressing his distaste for the clan. Fugaku stepped in and demanded Itachi's apology, but Itachi persisted, saying he had lost faith in the clan's future. It was only after Sasuke's pleaded for him to stop that he apologised.

"Sasuke and his Father" (サスケと父, Sasuke to Chichi)

Sasuke thought about that tension that had arisen between Itachi and Fugaku, wondering what could have ruined Itachi's standing amongst the Uchiha. However, from that point further, Fugaku became interested in Sasuke's development. After he taught Sasuke the Fire Release: Great Fireball Technique in less time than it had taken to teach Itachi, Fugaku said he was proud of Sasuke for the first time. He added that Sasuke should no longer try to follow in Itachi's footsteps. Sasuke nevertheless continued to idolise Itachi.

Sasuke asked his mother about Fugaku, wondering what their father really thought of him and Itachi. She assured him that Fugaku only ever had words of praise for Sasuke and that his interest in Itachi was only for the Uchiha clan's benefit. Soon afterwards, Sasuke returned home one night to find all the members of his clan dead; murdered by Itachi. Itachi used his Mangekyō Sharingan to torture Sasuke and destroy the facade of a loving older brother he had assumed for so long. Explaining to have killed the Uchiha to measure his abilities, Itachi added that Sasuke now represented his greatest challenge. If Sasuke were to grow up hating him and acquire the Mangekyō Sharingan, they would be a match. However, to gain it, Sasuke would need to kill his closest friend.

Itachi confirmed that he had killed Shisui to acquire the Mangekyō Sharingan, the death of one's closest friend being needed to awaken it. He directed Sasuke to the Naka Shrine and encouraged him to use the information stored there to become enough to gain power and kill him, avenging their clan. Sasuke passed out and woke up as the last Uchiha in Konoha. Distraught over the loss of the family that had just started to accept him, Sasuke agreed to live the rest of his life hating Itachi. Sasuke, realising that Naruto is his closest friend, decides to kill him to pave the way towards killing Itachi.

Naruto tries to find the logic in killing one's closest friend. Sasuke attacks him, pointing out that nobody will interrupt their fight this time. Sasuke prepares his Chidori to kill Naruto. Naruto, intending to drag Sasuke back to Konoha, prepares his Rasengan. Their attacks collide with each other. 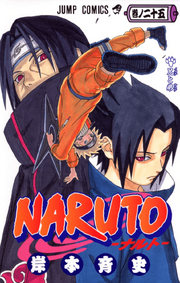