Ittan is a calm and collected individual even when under enemy attack.[2][3] He takes conflict seriously, reminding his teammate Zaji not to get overly confident because they were at war.[4]

Ittan has light-coloured, spiky hair and a dark-coloured beard (both of which are depicted as brown in the anime). He wears the standard Iwagakure shinobi outfit complete with his right sleeve missing as well as the forehead protector of the Allied Shinobi Forces.

As a chūnin, Ittan is a very capable shinobi. He is proficient with Earth Release, able to manipulate the earthen terrain to rise or sink, and create a rock dome to protect himself and allies from attacks.

Ittan was assigned to the Surprise Attack Division of the Allied Shinobi Forces. In the anime, he was one of the shinobi who got into fights with people from other villages, Ittan himself getting into an argument with Kiri, who said that Iwa-nin couldn't be trusted. They are however able to set their differences aside and work together after hearing Gaara's speech.

Shortly after he and his teammates had set up camp where Ittan was designated to create several trenches around the location, his team is approached by a fellow comrade, Muta Aburame, who is hurt. But after Muta attacks them, Hoheto Hyūga examines him, pointing out that he is being controlled and that a bomb is inside his gourd, setting to detonate. Ittan quickly uses an Earth Release technique to sink the entire area where they had set up camp to avoid the explosion. During the battle between the two ambush squads, on Kankurō's orders, Ittan raised the part of the earth he had previously sunk, sending Sasori crashing into the rising surface. He also used his ability to create a dome to protect the injured, allowing Kiri to heal them.

Later, he and part of his division encountered a back up for the Surprise Attack and Diversion Platoon. When they tried to flee from them, they are hit with Ibuse's Poison Mist and soon succumb to its paralysing effects. However, they are rescued by Mifune and the samurai of the Fifth Division who carry them to the Logistical Support and Medical Division for treatment. 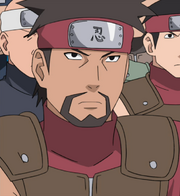