The Doctor (ドクター, Dokutā) was an Outer of Kara who worked for Victor's company in the Land of Valleys. Wanting to elevate his position, he secretly worked with the retired Third Tsuchikage Ōnoki to create the Fabrications and Akuta.

At some point after the Fourth Shinobi World War, the doctor had acquired the genetic material from the White Zetsu. One day, he approached Ōnoki, whose hopes to create artificial soldiers to replace the shinobi of Iwagakure backfired, to offer his services with the material he obtained. With it, they created the Fabrications, artificial humans to help lead the Akuta, mindless soldiers created from clay. To lead the Fabrications themselves, the doctor and Ōnoki created a Fabrication clone of the Tsuchikage himself, Kū.

The doctor was loyal to Iwagakure's well-being to the point that he was willing to assist the Third Tsuchikage in creating a private army that undermines the peace treaty of the Shinobi Union. However, unlike Ōnoki, the doctor was willing to commit sacrifices to ensure these soldiers will have a stable body to serve their duties. His loyalty to Ōnoki was also a facade to gain experimental data for Kara's cause.

While working as an Outer of Kara, the doctor was rather unhappy being left out of the more important information when he requested for an update on the development, being reprimanded for asking questions and told to simply attend his work.

The doctor has an oval face with thick grey hair on the sides, but bald on the top, and a toothbrush moustache. He has narrow eyes with wrinkles under them, and creases around his mouth area.

He wears a white lab coat over a dark navy turtleneck and pants, and a monocle over his right eye.

The doctor was very intelligent, being able to use the genetic materials acquired from White Zetsu to create artificial lifeforms, the Fabrications, and even integrate them with certain genetic anomalies to grant them advanced nature transformations. He could also use a fragment of the God Tree, combined with Hashirama's Cells, to cause an artificial God Tree to blossom.

The doctor's scientific ingenuity did have its limitations, as his creations were flawed with unstably short lifespans and durability. He managed to overcome this flaw by examining Mitsuki, a different type of artificial human (limited by a cursed seal that he cannot get through), though it requires a human to be sacrificed in the process, which defeats the very purpose of having Fabrications to protect humanity to begin with. Also, his artificial God Tree could not beget a Chakra Fruit, instead having created a tree that simply absorbed chakra from every living beings within reach.

Despite having his heart torn out by Kū, he somehow managed to come back to life.

Main article: Mitsuki's Disappearance Arc The doctor assisted Ōnoki in maintaining the Fabrications' fragile health, and seeking a method to stabilise them permanently. Upon bringing in Mitsuki, the doctor did an examination on the artificial boy's body. Though Mitsuki's heart had a cursed seal blocking the sensors from learning the body's secrets in-depth, the doctor was able conclude that he can craft an artificial heart by using a live human's heart as raw material, which can be used to extend a Fabrication's lifespan.

Though Kū was at first reluctant in trampling over Ōnoki's creed, he eventually had Iwagakure under lock-down and ordered the doctor to proceed in creating artificial hearts for all the Fabrications. However, before the doctor could extract the raw material out of five Iwa-nin, the Fourth Tsuchikage was freed from imprisonment and led a counterattack against Kū's faction, freeing the "donors" who in turn bound the doctor as they left to deal with the Akuta.

When Kū returned to the lab, fatally wounded by Mitsuki, he released the doctor to have him prepare the artificial heart. The doctor notified him due to the donors' escape, the heart remains incomplete. Kū, noticing that all that is required to complete his new artificial organ is a human heart, turned around to kill the doctor for it, who was overwhelmed with horror as the Fabrication attacked.

After Kū was killed by Ōnoki and Iwagakure was back in the custody of Kurotsuchi, the Iwa-nin found the doctor's corpse was gone. Orochimaru and Log later noted that someone was probably interested in the doctor's ability to create such powerful artificial lifeforms.

Main article: Kara Actuation Arc The doctor was later revealed to have been resusicated and working directly for Victor's company, using his research with Ōnoki to further Victor's own research. In a secret lab accessed by an elevator to deep underground, he began working on various subjects. As he asked Victor's secretary about any new development, she reminded him that Outers such as them are only mean to follow orders, not ask questions, which he grumpily accepted.

Later, the doctor welcomed the daimyō when he visited the company for an inspection. When Victor explained they were using the cell of Hashirama Senju for their research, Konohamaru Sarutobi and Mugino, who were disguised as the daimyō's bodyguards, revealed themselves and undid the genjutsu placed on him, exposing Victor's inhuman experiments. After being attacked by Mugino, Victor activated the experiment, which grew into an artificial God Tree. As Victor and his secretary took the elevator to inspect it, the doctor was left behind to have his chakra absorbed by the tree. 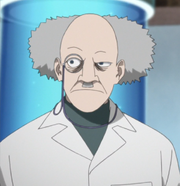