Iwana (ヤマメ, Iwana) is a citizen of the Land of Water.

During his childhood, Iwana was close friends with Yamame. When Kagura Karatachi had moved to their village, Iwana had noticed he isolated himself from the other children, so he and Yamame approached the boy and befriended him.

He is a kind, friendly and positive guy. Iwana treats shinobi with respect and, realising that they are the hope for saving the village, refuses his food in their favour. He also keeps the memory of the deceased Kagura.

Iwana is a short, chubby guy with short ash-violet hair and a similar shade of eyes. He wears a grey t-shirt with purple sleeves, pants, and sandals.

He has skills as a carpenter and builder, being able to build barriers and fences with Yamame and Kyohō Fuefuki in a short time.

Main article: Great Sea Battle of Kirigakure Arc Years after leaving the village, Kagura returned and was greeted by Iwana and Yamame. Kagura informed his childhood friends of the threat of the elite forces from the Funato clan, who would pass by their village on their way to Kirigakure. Iwana agreed to help his childhood friend and his allies to help defend the village. Later, Iwana noticed Kyohō Fuefuki cutting down trees by himself, both him and Yamame offered to help him in setting up the village defences. Impressed with his strength, Iwana suggested Kyōho should return to their village once the war with the Funato is over to do some work for them. After the Funato's attack, Iwana and Yamame made repairs on their village while still mourning for Kagura. 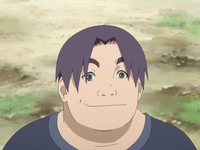