Jiraiya's Choice!! (自来也の選択!!, Jiraiya no Sentaku!!) is volume 41 of the Naruto manga.

The Amegakure ninja refuses to tell Jiraiya anything about Pain's current activities. Jiraiya leaves him, admiring his loyalty. He removes Gerotora from his body, explaining that he is worried about confronting Pain. He tells Gerotora to store himself within Naruto if he doesn't return. Gerotora, containing the key to the seal that keeps the Nine-Tails within Naruto, advises against it. Jiraiya insists, believing Minato would want Naruto to master the Nine-Tails for some unknown purpose, perhaps to combat Tobi.

As Hebi heads to the rendezvous point with Itachi, they come across one of Naruto's shadow clones. Sasuke destroys the clone, but Naruto and the other Konoha ninja pick up on his trail. In Amegakure, Jiraiya sends one of his prisoners to Konoha while he takes control of the other to explore the village. Konan sees him and tells Pain about Jiraiya's presence. Pain tells her to kill him if she can before he gets there. Konan confronts Jiraiya and releases the Amegakure ninja under his control. Jiraiya, surprised to see her, remarks that she has grown.

Jiraiya asks Konan, a former student, who Pain is. She attacks him instead of answering, having orders from Pain to kill him. He quickly neutralises and captures her. Jiraiya remarks that, having thought Konan and her peers were dead, he had never imagined they would be members of Akatsuki. She asks if he regrets sparing their lives, causing him to think back to when he met Konan and her friends. After the Second Shinobi World War, Jiraiya found three war orphans that he decided to teach how to look after themselves. Soon after meeting them, Jiraiya discovered that the boy Nagato possessed the Rinnegan.

When Jiraiya saw the young Nagato's Rinnegan, Jiraiya decided to train him, Konan, and Yahiko so they could protect themselves and others. Having heard rumours that the Rinnegan originally belonged to the founder of the ninja world, Jiraiya also wished to teach Nagato to control his power for the world's benefit. Once he had taught them all they needed he left them on their own, later hearing they had died. Although he is glad this is not the case, Jiraiya tells Konan that what Akatsuki is doing is wrong. Pain appears and refutes the claim. Seeing Pain's Rinnegan, Jiraiya assumes that, although he looks very different, he is Nagato.

Pain summons a giant crustacean to free Konan from Jiraiya's technique. He instructs Konan to leave them. Jiraiya destroys the crab and asks what Nagato has done to himself and what happened to Yahiko. Pain responds that Yahiko is dead and that he has moved on from his childish beliefs after experiencing so much pain, having how attained godhood. In his role as Akatsuki's leader, Pain intends to capture the nine tailed beasts to create weapon that can destroy entire countries. In the face of such power, the world will give up on war and achieve peace. Jiraiya insists that that would never work. Pain summons a chameleon to prove his point, and Jiraiya summons Gamaken.

Jiraiya tells Gamaken to buy him time while he prepares for Sage Mode. Pain hides within his chameleon and summons other animals to fight Gamaken. While Gameken defends against them, Jiraiya points out that Pain, having the Rinnegan, can use almost any technique, yet he has so far used only animal summons. Jiraiya sends Gamaken away once he is ready, blocking a summon by himself and re-entering the battle with two new toads.

Having entered Sage Mode, Jiraiya faces Pain in battle with the help of Two Great Sage Toads. They ask why he would need their help, to which he responds he must kill a former pupil. Finding this significant, Two Great Sage Toads locate the chameleon Pain is hiding in and force him to show himself. Seeing his Rinnegan, they reflect on a prophecy that was made about Jiraiya. Jiraiya would have a student with the power to save or destroy the world. Seeing that Pain has taken the path to the world's destruction, they prepare for battle. Pain also prepares by summoning two bodies.

The two bodies that Pain summons turned out to also possess the Rinnegan. Although confused that there are three people with the Rinnegan, Jiraiya attacks, blinding one of the Rinnegan wielders. He then joins Two Great Sage Toads in a joint elemental attack, but the second body absorbs it and all of their subsequent attacks. Jiraiya tries to attack the blinded body, but it has no difficulty blocking attacks that one of the other bodies can see. Noticing this, Fukasaku hypothesises that they are somehow able to share vision.

Knowing that, even in Sage Mode, he cannot defeat three Rinnegan users that are able to share sight, Jiraiya retreats. In addition to being able to react to any physical attack, Pain, a former student, knows all of Jiraiya's abilities. To get around this particular fact, Ma and Pa propose a sound-based genjutsu, an area that Jiraiya himself has little skill with. While they prepare the attack Pain is drawn to their location. To buy time, Jiraiya cuts off the three Rinnegan from each other, allowing him to finally fight one-on-one.

Jiraiya is able to hold his own in a fight with Pain long enough for Ma and Pa to use their genjutsu. The three Pains are caught in an illusion and immobilised, allowing Jiraiya to easily kill all three. Confident he has won, Jiraiya thanks Shima and Fukasaku for their help with eliminating Pain. Another person with a Rinengan appears and corrects him. He attacks Jiraiya and severs his left arm. The Six Paths of Pain confront Jiraiya, amongst them the three bodies he just killed, and all possessing Rinnegan. 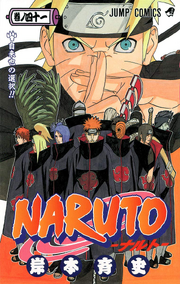