Jump Force is a crossover video game by Bandai Namco Entertainment for PlayStation 4, Xbox One, Nintendo Switch, and Microsoft Windows.

The game was first announced in June 2018, in the XBox E3 Conference. It was made to commemorate the 50th anniversary of the Weekly Shōnen Jump magazine. The game was released on February 14, 2019.[1]

On November 10, 2021, Bandai Namco announced the discontinuation of the game. It was delisted from digital stores along with its downloadable content on February 8, 2022. The shutdown of its online servers is to happen on August 24, 2022. 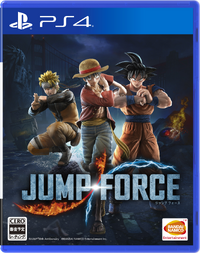