Jump Super Stars is a 2D fighting game for the Nintendo DS. It was developed by Ganbarion and published by Nintendo. The game was released on August 8, 2005 in Japan and accompanied the release of a red Nintendo DS. Jump! Ultimate Stars, the sequel to Jump Super Stars, has been released in Japan as of November 23, 2006.

In its first week of availability, Jump Super Stars sold 220,912 copies.[1] Jump Super Stars will not be released outside of Japan on account of cross-licensing issues created due to the distribution rights of the several different series being held by numerous anime and manga licensing companies.

Jump Super Stars features characters from the Weekly Shōnen Jump manga magazine in Japan. The game features gameplay similar to that of Super Smash Bros. The game supports 2-4 players in multiplayer and features over 75 missions.

Koma (panel) is the term for the characters that the player can use in the game. Each koma uses from 1 to 7 squares of the koma deck at the bottom screen of the Nintendo DS. The deck has 20 squares (4 x 5) for the player to place his koma.

There are three types of komas: help koma, support koma and battle koma.

The player can build and store up to ten koma decks, and each deck must have at least one help koma, one support koma and one battle koma to be valid for use in battle. There are also a set of predefined decks that the player can use, but the player cannot change or delete those. It is also possible to exchange decks between friends, but they won't be able to edit the decks.

Ally boosting is done by placing komas next to each other in the deck maker. If the komas placed next to each other are "compatible", their attributes will go up. Battle characters can get a longer health bar, or increase the maximum number of special attack gauges.

Jump Super Stars features 32 locations and stages; there is a level for each Manga show that has one of its characters in the game (either battle, support, help, or any other kind of character). 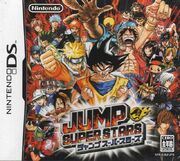