Jump Ultimate Stars was released in Japan on November 23, 2006.

Jump Ultimate Stars is a fighting game which is based on the characters from various anime and manga series including Naruto, One Piece and Dragon Ball Z. It was developed by Ganbarion and published by Nintendo for the Nintendo DS. The game has over 300 characters from 41 different manga series. It is the second game in the series. 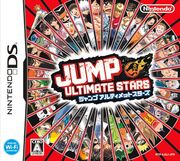