Kawaki fears Boruto is experiencing side effects from Amado's drugs. Time stops for everyone but Boruto, who has another vision of Momoshiki. He tells Boruto that the drugs are just a stopgap measure in his Kāma's extraction. Boruto recalls time also stopped before when Momoshiki was defeated. Momoshiki notes Code, finding him worthless, and decides to kill him to take possession of his Ten-Tails. Time resumes, and Momoshiki attacks Code, who narrowly avoids a Rasengan. He comments how superior it is to Boruto's strength with Kāma, seeing how Boro had no chance. Momoshiki intends to do the same to him. Sai informs Amado that Kawaki and Code are already fighting, having encountered an unknown chakra signature near Boruto. Knowing Code isn't a sensor, he finds it strange he found Kawaki so fast. Sumire suggests he has an Outer working with him, but Amado knows no Outer that skilled. Sai is hopeful that Naruto will defeat Code, and notices Amado is deep in thought. He is concern about what Kawaki might do. Momoshiki keeps using Rasengan, keeping Code on the defensive. Ada suggests he retreat.

Code immobilises Kawaki, using him as a shield against Momoshiki, who needs Kawaki as a sacrifice as well. He considers it an honour having met Momoshiki, and begins to leave. Momoshiki compresses a Rasengan and shoots it as a bullet, piercing Code. He grabs hold of Kawaki and comments on Code's inability to absorb jutsu with his White Kāma. Ada contacts Code. Momoshiki tells Kawaki to respect him for saving him, but Kawaki attacks, so Momoshiki prepares to break his arm. Shikamaru stops him with his shadow, allowing Naruto to grab Kawaki. They notice Boruto is possessed again. Momoshiki absorbs Shikamaru's jutsu, freeing himself. Ada still thinks Code should retreat, but Code is pleased by Shikamaru's presence. Naruto asks Kawaki about him and Boruto, but Kawaki is distraught Naruto is there, telling him to flee. Naruto refuses. Code takes Shikamaru hostage. Shikamaru yells for Naruto to ignore him and attack Code, saying he knew what he was getting into. Momoshiki decides to help Code kill Naruto, who is also a problem for him. Kawaki attacks Momoshiki, who kicks him aside. Naruto braces himself for Momoshiki's Ultra-Big Ball Rasengan. He notices his jutsu is being absorbed. Kawaki recalls Amado's words as he absorbs the jutsu with a Kāma that is purely a weapon now that Isshiki's soul is gone. All are surprised by it. 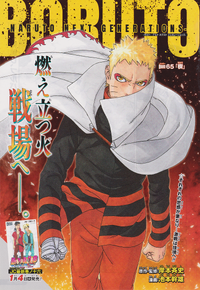